Are you sure your patient has intestinal atresia? What are the typical findings for this disease?

Intestinal atresia is a congenital condition in which the lumen of the small or large intestine is not continuous. Most often there is one isolated atretic segment, but some neonates may have multiple atretic segments.

Duodenal atresia has to be distinguished from jejunal and ileal atresia because it is often associated with other anomalies (e.g., trisomy 21 and congenital heart disease).

Isolated colonic atresia is rare; it is found in less than 5% of patients with intestinal atresia. It can be associated with small bowel atresia. Esophageal atresia and imperforate anus are discussed in separate chapters and are not considered part of intestinal atresia.

In proximal atresia (duodenal atresia, or proximal jejunal atresia) the diagnosis is generally made within a few hours of birth. Signs of intestinal obstruction, mainly vomiting, clue the practitioner in to the potential for abdominal pathology. Abdominal distension may be absent as there may not be enough bowel present proximal to the obstruction to distend the abdomen. The abdominal radiograph will show a double bubble for duodenal atresia and may resemble a triple bubble for jejunal atresia. A contrast study is typically not necessary, although if there is gas in the small intestine, a contrast study can help with the diagnosis of a web.

A distal obstruction results in abdominal distention and it may take 2-3 days before a diagnosis is made. Often a contrast enema is required to confirm the diagnosis.

Duodenal atresia is most commonly found in the second or third portion of the duodenum. It is associated with trisomy 21 and congenital heart disease.

These conditions are often classified according to four types.

Type 1: Single atresia formed by a mucosal and submucosal membrane, with a continuous seromuscular layer.

Type 3B: Single atresia with gap in the mesentery and foreshortened distal small bowel (apple-peel deformity).

Any condition that causes complete obstruction of the small or large intestine in the newborn can present the same.

Duodenal atresia: The cause is unclear, but it is likely secondary to an error in recanalization during intestinal development at 7-8 weeks’ gestational age. It is associated with trisomy 21 and other anomalies.

Jejunal/ileal atresia: Most experts agree that it is the result of an intrauterine acute vascular event. Cystic fibrosis is the cause in up to 10% of cases. Neonates with gastroschisis are also at increased risk of intestinal atresia.

Colonic atresia: The cause is similar to that of jejunal/ileal atresia; Hirschsprung’s disease can result in colonic atresia.

Bilirubin needs to be followed because intestinal obstruction results in decreased fecal elimination of bilirubin. Electrolytes should be followed in all cases because of the need for parenteral fluids and nutrition. Infants with high obstructions may lose gastrointestinal fluid secondary to vomiting.

Babies with duodenal atresia may need genetic studies to investigate the possibility of trisomy 21. Ileal atresia may indicate the need to test for cystic fibrosis.

Duodenal atresia is often diagnosed on prenatal ultrasonography. The ultrasonogram will demonstrate a large stomach bubble and a large duodenal bubble. After birth a single-view abdominal radiograph will usually demonstrate the typical double bubble.

Duodenal atresia: This presents with vomiting, which may be bilious depending on the location of the atresia. If the atresia is proximal to the ampulla of Vater, the baby will vomit nonbilious material. If the atresia is distal to the ampulla, the baby will vomit bilious material. If the vomit is bilious it is important to make sure that malrotation with midgut volvulus is not present. This is a surgical emergency and has to be ruled out.

An abdominal radiograph is important in the diagnosis of these conditions. In duodenal atresia, a double bubble is typically present. Proximal jejunal atresia may have a triple bubble – air in the stomach, duodenum, and proximal small intestine creating this effect. The radiograph shows a short segment of very distended small intestine.

Distal ileal atresia: This will have large amounts of distended loops of bowel. If seen on radiography, the next step is often a contrast enema to rule out meconium ileus and to make sure the colon is intact without additional atretic segments.

If you are able to confirm that the patient has intestinal atresia, what treatment should be initiated?

A nasogastric or orogastric tube must be placed as soon as the diagnosis of an atresia is made. Ideally a 12 Fr sump suction tube should be used. For small babies weighing less than 2500 g, a 10 Fr tube can be used.

An intravenous normal saline bolus is important. Intraluminal sequestration constitutes third space fluid loss. As a result, infants may be severely intravascularly depleted at the time of diagnosis.

Duodenal atresia is not a surgical emergency because the obstruction is proximal and the stomach and proximal duodenum can easily be decompressed with a nasogastric or orogastric tube. Since babies with duodenal atresia may have cardiac anomalies, it is often necessary to obtain an echocardiogram before taking the baby to the operating room.

The surgical treatment of duodenal atresia is the creation of a duodenoduodenostomy between the first and third portions of the duodenum; this provides a bypass around the area where the pancreatic and biliary ducts empty into the duodenum. This operation can be performed through a right upper transverse incision, an umbilical incision, or laparoscopically.

The surgical management of jejunoileal atresia requires the creation of an anastomosis between the small intestine proximal and distal to the atresia. Often a segment of intestine will have to be resected. If the proximal bowel diameter is more then three times the distal bowel diameter, most surgeons will taper the intestine.

It is important to rule out additional atretic segments in the intestine distal to the most proximal atresia before performing the anastomosis. This can be done by inserting a small catheter (e.g., an 8 Fr red rubber catheter) and flushing saline distally, making sure it fills the bowel down into the colon and throughout the colon; alternatively, a contrast enema can be performed before surgery.

Parenteral nutrition should be initiated within 24 hours and adjusted according to electrolyte measurements.

What are the possible outcomes of this disease?

Long-term outcomes for babies with intestinal atresia are generally very good and are mostly affected by any additional anomalies that may be present. Since duodenal atresia is associated with trisomy 21 and congenital heart disease, associated anomalies are of more importance than the duodenal atresia. For jejunoileal atresia, the outcome is a function of postoperative bowel length.

Jejunoileal atresia: This is believed to be secondary to an intrauterine vascular accident. Use of vasoconstrictive medications and smoking have been shown to be associated with an increased risk of developing jejunoileal atresia (particularly in combination). Cystic fibrosis can result in segmental volvulus and atresia. Vasoocclusive disease (e.g., a fetus with factor V Leiden) predisposes an infant to vascular accidents and intestinal atresia.

Colonic atresia: The cause of this is similar to that of jejunoileal atresia. Hirschsprung disease is also associated with colonic atresia and should be ruled out.

How can intestinal atresia be prevented?

Prevention is through avoidance of medications and substances thought to be associated with fetal vasoconstriction.

Powered By Decision Support in Medicine.
Jump to Section
Next post in Pediatrics 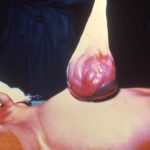