Are you sure your patient has meconium aspiration syndrome? What are the typical findings for this disease?

Aspiration of amniotic fluid contaminated with meconium before, during or after delivery causes surfactant dysfunction and airway obstruction with evolving respiratory distress. However, the meconium aspiration syndrome (MAS) is also characterized by hemodynamic deterioration and persistent pulmonary hypertension (PPHN). MAS is associated with acute or chronic fetal distress (see mechanisms below). The syndrome should be considered in any infant born through meconium stained amniotic fluid who has respiratory distress and hypoxemia.

The risk of MAS increases with advancing gestational age, and is particularly common in postmature fetuses. It is also associated with fetal distress, utero/placental insufficiency and chorioamnionitis.

The clinical presentation of MAS can be variable. For example, the chest radiograph may be initially marked by patchy parahilar consolidation associated with aspiration of particulate meconium, but subsequent progression of diffuse parenchymal disease may complicate the clinical course (related to a “secondary” surfactant deficiency or surfactant inactivation). A subset of patients with meconium aspiration syndrome has predominantly airway disease associated with aspiration of particulate meconium. The viscous meconium material within airways often causes ball or check-valve obstruction that allows gas flow during inspiration but obstructs expiratory flow, leading to focal lung over inflation and air leak.

Since PPHN frequently complicates the course of infants with MAS, preductal and postductal pulse oximetry monitoring should be used to determine the presence of postductal desaturation caused by right-to-left shunting at the PDA.

Described below is an initial evaluation of the infant with hypoxemia. This approach is designed, upon the initial clinical encounter, to begin to distinguish among the many causes of hypoxemia in the immediate newborn period. In general, severe hypoxemia can be caused by congenital heart disease (intracardiac veno-arterial admixture), parenchymal lung disease with intrapulmonary veno-arterial shunting, and pulmonary hypertension causing extrapulmonary shunting across the PDA and/or FO.

This approach will help you understand if the infant has heart disease, lung disease, or pulmonary vascular disease. However, it is important to remember that infants with MAS/PPHN commonly have severe pulmonary vasoconstriction complicated by both parenchymal lung disease and compromised cardiac performance.

History: Clues to the cause of hypoxemia and respiratory failure can be gleaned from the prenatal history. Any results of prenatal ultrasound studies should be reviewed carefully for evidence of anomalies, oligohydramnios (severity and duration related to pulmonary hypoplasia), fetal brady/tachy arrhythmia, fetal distress and umbilical vessel Doppler studies. The presence of meconium stained amniotic fluid suggests fetal distress and the potential for perturbations in the transitional pulmonary circulation. Risk factors for infection should be reviewed including the nature of membrane rupture (preterm – before 37 weeks gestation, premature – before the onset of labor, and prolonged >18 hours).

Physical exam: The key question on first evaluating the newborn with hypoxemia is the presence or absence of respiratory distress (grunting, nasal flaring, retractions). Although respiratory distress has many causes (e.g., upper airway obstruction, severe metabolic acidemia etc.), most commonly it suggests decreased lung compliance and the presence of parenchymal lung disease. Often patients with severe PH have a murmur associated with tricuspid regurgitation. This murmur sounds similar to that caused by a VSD in an older infant after pulmonary vascular resistance has decreased.

Response to high inspired oxygen: When called to evaluate an infant with hypoxemia who has been treated with supplemental oxygen (mask, hood oxygen), it is important to ask about the pulse oximetry change that occurred when oxygen was provided. Newborns with cyanotic (structural) heart disease are unlikely to show a marked increase in saturation (>90%) with supplemental oxygen. The most common cyanotic heart disease presenting with marked hypoxemia in the first day of life is TGV (transposition of the great vessels). Infants with TGV have pulse oximetry saturations <75% despite high inspired oxygen. A marked increase in saturation after providing supplemental oxygen is consistent with parenchymal lung disease or PPHN.

1. If the readings are equivalent and saturations are low (<80%), there are 3 possible explanations – the cause of hypoxemia is intrapulmonary shunting (lung disease), the cause is cyanotic heart disease with ductal dependent pulmonary blood (i.e. obligate left-to-right blood flow with lesions such as pulmonary stenosis, tricuspid atresia, Ebstein anomaly), or severe PH with a closed ductus (extremely uncommon).

Chest radiograph: The most important question to ask when reviewing the CXR is: “Is the oxygen requirement out of proportion to the radiographic changes”. In other words, an infant treated with high inspired oxygen and low saturations who has a clear (black) CXR does not have parenchymal lung disease, and the next step should be echocardiography.

Echocardiography: After the initial assessments described above have been performed, echocardiography is essential in understanding the structural and functional characteristics of the heart in the newborn with suspected PPHN.

The first goal of echocardiography is to rule out congenital heart disease conditions that could explain the hypoxemia or pre-post ductal saturation differences (described above). In an infant with a structurally normal heart, the key windows on the pulmonary circulation include the direction (right-to-left, bidirectional, left-to-right) of shunting across the PFO and PDA, and the estimate of RV systolic pressure using Doppler measurements of the peak velocity of the tricuspid regurgitation jet. In an anatomically normal heart, the Doppler estimate of RV systolic pressure should reflect pulmonary artery systolic pressure. If there is no bidirectional or right-to-left shunting across the PFO or PDA, then pulmonary hypertension is not the immediate cause of severe hypoxemia (PPHN is a labile condition and these measurements can acutely change during the course).

In other words, in an infant with severe hypoxemia despite high inspired oxygen who has a structurally normal heart without evidence of suprasystemic pulmonary artery pressure causing right-to-left venoarterial admixture, the likely cause of hypoxemia is severe lung disease and intrapulmonary shunting.

Finally, pulmonary vasodilator drugs should be used with caution in an infant with pulmonary hypertension, right-to-left PDA shunting but left-to-right PFO shunting and evidence of LV systolic/diastolic dysfunction with mitral insufficiency. In this setting, high left atrial pressure can contribute to pulmonary venous hypertension and efforts should focus on improving cardiac performance before pulmonary vasodilation.

If you are able to confirm that the patient has meconium aspiration syndrome, what treatment should be initiated?

A reasonable approach to the management of meconium aspiration syndrome might include early use of exogenous surfactant as a small volume bolus in patients with evidence of parenchymal lung disease and without echocardiographic evidence of significant pulmonary hypertension. Caution should be exercised in infants with marked pulmonary vaso-lability because surfactant administration could contribute to a pulmonary hypertensive crisis with marked desaturation.

Inhaled nitric oxide has been firmly established as a safe and effective therapy for newborns with severe hypoxemic respiratory failure and pulmonary hypertension (PPHN).

For patients with meconium aspiration syndrome and diffuse parenchymal disease with lung under-inflation, lung recruitment with high-frequency oscillatory ventilation may also play an important role early in the course of the disease. Any signs of lung over-inflation, however, portend the risk for air leak and should be carefully monitored. In this setting, a rational approach to mechanical ventilation might include a conventional strategy that is more analogous to the management of respiratory failure with airways disease, using slow ventilator rates and allowing increased time for expiration.

The role of lung lavage with a dilute surfactant mixture has unproven efficacy at this time.

ECMO remains an important treatment option for infants with MAS, and should be considered for newborns with severe hypoxemic respiratory failure and shock despite optimal management.

What are the possible outcomes of meconium aspiration syndrome?

Survival remains greater than 90% even for infants with severe MAS who require treatment with ECMO. Newborns with MAS are at an increased risk for neurodevelopmental impairment, likely related to the severity of in-utero and neonatal hypoxemic-ischemic injury.

The risk of MAS increases with advancing gestational age, particularly in postmature fetuses. It is also associated with fetal distress, utero/placental insufficiency and chorioamnionitis.

How can meconium aspiration syndrome be prevented?

Amnioinfusion has been used to dilute the meconium contamination of amniotic fluid. This technique has been shown to decrease the need for NICU admissions and mechanical ventilation, but there is not compelling evidence that outcomes are improved.

Surfactant lavage is a strategy designed to enhance removal of particulate meconium from the airways and reduce the complications associated with ball and check-valve obstruction. This approach remains investigational and cannot be recommended as standard therapy.

(A review of inflammation in MAS.)

(Cochrane review of surfactant for meconium aspiration syndrome. In infants with MAS, surfactant administration may reduce the severity of respiratory illness and decrease the number of infants with progressive respiratory failure requiring support with ECMO.)

(Committee on Fetus and Newborn statement on surfactant replacement therapy for preterm and term neonates with respiratory distress.).

(An editorial reviewing the role of suctioning at the perineum and after delivery.)

(A randomized, controlled trial of surfactant treatment in newborns with respiratory failure.)

(Epidemiology of respiratory failure in the newborn.)

RCT on the role of inhaled nitric oxide and HFOV in MAS. 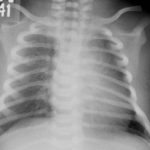 Transient tachypnea of the newborn