Relapsing Fever is an arthropod-borne spirochetal infection characterized by recurring febrile episodes of a remitting nature. There are two forms: Tick-borne relapsing fever (TBRF), sometimes called endemic, and Louse-borne relapsing fever (LBRF) or epidemic. Both forms are caused by Borrelia species. This chapter will primarily address TBRF (with comments on LBRF).

Are you sure your patient has Relapsing Fever? What are the typical findings for this disease?

Most physical findings are non-specific. Temperature is usually at least 390C and may reach as high as 43°C. Other findings may include;

Epidemiologic features should help with differentiation from the following:

Malaria (may be concurrent in LBRF)

If you are able to confirm that the patient has Relapsing Fever, what treatment should be initiated?

RF has been treated successfully with tetracyclines, chloramphenicol, penicillin, and erythromycin. Resistance has not been reported. Treatment for TBRF is usually for 7 days, although duration of treatment is not well-studied. Before starting any regimen, the possibility of causing the Jarisch-Herxheimer reaction needs to be considered. For TBRF: Oral treatment is preferred.

Adolescents and children >8 years of age:

Longer therapy up to 2 weeks for complicated patients; has not been studied

The Jarisch-Herxheimer reaction is commonly induced when treating relapsing fever. It is generally less severe in children. It is associated with severe rigors, leukopenia, increase in temperature, and hypotension. It appears to be an exaggeration of the crisis observed in untreated patients and is most severe in LBRF treated with penicillin. It is associated with the release of cytokines including TNFα, interleukins 6 and 8, as well as others. The first symptoms usually appear within 1-4 hours of the first dose of antibiotic.

If possible, start treatment with antibiotics during an afebrile period when there is a lower load of organisms in the blood. However, treatment should not be inordinately delayed.

Monitor in an intensive care unit, if possible, with close attention to fluid status, blood pressure, and cardiac function for the first 6-12 hours.

Pretreatment with corticosteroids is ineffective.

Use of nonsteroidal antiinflammatory medications has been tried and may be helpful.

What are the possible outcomes of Relapsing Fever?

The mortality rate for treated relapsing fever (TBRF) is <5%. Most patients recover without sequelae. Rare patients have had ophthalmic scarring, renal problems, or neurologic abnormalities such as sensorineural hearing loss.

Most patients recover without sequelae. Poorer prognostic features include: stupor and coma on admission, diffuse bleeding, myocarditis, poor hepatic function, bronchopneumonia, and co-infection with typhus, typhoid, or malaria. Relapsing fever in pregnancy may lead to abortion or stillbirth. Pregnant women and infants tend to have more severe and prolonged illnesses. Rare patients have residual renal, neurologic, or ocular problems.

How can Relapsing Fever be prevented?

Prevention of RF requires avoidance or elimination of the arthropod vectors.

Insecticides can be used for dwellings such as log cabins and surrounding areas.

Use permethrins on clothing.

Use insect repellent such as DEET on skin may further decrease exposure risks.

Report cases immediately, particularly if they can be traced to public recreational settings.

Prophylactic use of doxycycline for 5 days has been studied with positive results in Israel (B. persica). No prophylactic treatment studies have been done in children or in North America.

No vaccine is available.

Because TBRF tends to be a sporadic disease, there are no well-controlled studies of diagnostic or treatment options. Because of the antigenic variation in the organism, vaccine development has been difficult. 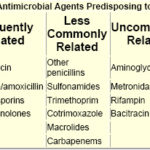