Spontaneous abortion (SAB) may be diagnosed incidentally on ultrasound or may present with amenorrhea, vaginal bleeding, and/or pelvic pain. A pregnancy test should performed on all women of childbearing age who present with vaginal bleeding. Physical exam is important to assess hemodynamic stability, abdominal tenderness or peritoneal signs, the degree of bleeding, uterine size, and cervical dilation.

For women who are stable at less than 12 weeks with spontaneous abortion, then management options include expectant, misoprostol, or surgical evacuation of the uterus. Women should be counseled regarding the risks and benefits of each management option and allowed to choose according to their personal preferences.

Are you sure your patient is experiencing a spontaneous abortion? What are the typical findings for this disease?

The most common symptoms of spontaneous abortion are:

Other symptoms may include passage of tissue from the vagina, fever or chills, malaise, and the loss of normal pregnancy-related symptoms such as breast tenderness and nausea. Women may also be asymptomatic.

Spontaneous abortion: Pregnancy that ends spontaneously before the fetus has reached a viable gestational age. This is typically defined as an embryo or fetus weighing 500 g or less, or less than 22 to 24 weeks gestational age.

Complete abortion: Passage of all the products of conception. Before 12 weeks of gestation, it is possible for all the uterine contents to be expelled.

Incomplete abortion: Passage of some, but not all, products of conception. After 12 weeks of gestation, it is common for the fetus to pass but placental tissue may be retained.

Threatened abortion: Vaginal bleeding through a closed cervical os in the presence of a viable intrauterine gestation.

Inevitable abortion: Vaginal bleeding through an open cervical os in the presence of a viable intrauterine gestation.

Missed abortion: In-utero death of the embryo or fetus prior to viability. Also known as early pregnancy failure, which can be divided into anembryonic pregnancy (“blighted ovum”) and embryonic / fetal demise. Currently, missed abortion is an ultrasound diagnosis. However, the term originated before the development of ultrasound, when a nonviable pregnancy was retained in the uterus without spontaneous passage for at least 8 weeks since the demise.

Gynecologic- Pregnancy-related, so may also have amenorrhea and/or vaginal bleeding and pain

Commonly cited risk factors (in order of highest strength of association) for spontaneous abortion may include:

Causes of spontaneous abortion may include:

Women actively in the process of having a spontaneous abortion will report amenorrhea, vaginal bleeding, and/or pelvic pain. Women may also be diagnosed with a failed pregnancy incidentally on ultrasound, so may be asymptomatic.

Physical exam should include vital signs, and abdominal and pelvic exam. Depending on the amount of blood loss, the patient may be hemodynamically unstable. An abdominal exam should evaluate for tenderness and any peritoneal signs, such as rebound or guarding, that may indicate an ectopic pregnancy. A speculum exam should be performed to assess how briskly the patient is bleeding from the uterus and identify any other sources of bleeding. A bimanual pelvic exam will allow for assessment of uterine size and cervical dilation as well as adnexal mass or tenderness.

Threatened abortion is defined as bleeding through a closed os. The bleeding may be painless or accompanied by mild pelvic pain. The pregnancy on ultrasound will be viable.

Inevitable abortion is defined as bleeding through an open os. The bleeding is usually accompanied by pain. There may be products of conception visualized at the os. As seen on ultrasound, however, the pregnancy will still be present in the uterus and viable.

Incomplete abortion is defined as the passage of some, but not all, products of conception. Typically, the cervical os will be open and the uterus is not well contracted. The bleeding can be extremely heavy and cause hemodynamic instability.

Complete abortion is defined as the passage of all the products of conception. The uterus should be small and well contracted with a closed cervix . Bleeding should be minimal.

If the pregnancy is highly desired and the results are borderline, then the ultrasound can be repeated in one week to check for appropriate growth.

There is typically no role for β-hCG monitoring once the presence of an intrauterine pregnancy has been established by ultrasound.

Whether or not a subchorionic hematoma is predictive of poor fetal outcome is controversial.

For women with a previously known intrauterine pregnancy, an ultrasound showing an empty uterus likely indicates a complete spontaneous abortion, taking into account history and exam findings. The ultrasound may also show evidence of retained products of conception. The ultrasound diagnosis of retained products of conception is not always accurate, however. Therefore, ultrasound findings must be correlated with the patient’s symptoms. No endometrial thickness measurement has been shown to reliably predict the need for intervention.

Vaginal bleeding can occur in normal pregnancies. There is no proven treatment for threatened abortion besides expectant management. While abstinence from sexual activity may be recommended, there is no evidence that this impacts the clinical outcome. Similarly, bedrest has not been shown to be helpful in the setting of threatened abortion. If there is a viable pregnancy on ultrasound, the rate of ongoing pregnancy is approximately 85%. Rh(D) immune globulin (Rhogam) should be given to Rh (D) negative mothers.

If you are able to confirm that the patient is having a spontaneous abortion, what treatment should be initiated?

If the patient is hemodynamically unstable with vaginal bleeding and/or sepsis, priorities include:

For women with septic abortions, or suspicion of intrauterine infection along with incomplete, inevitable, or missed abortion, then the treatment of choice is IV broad spectrum antibiotics and surgical evacuation of the uterus. It is important that a loading dose of antibiotics is given prior to surgical evacuation. For women with a complete abortion and mild postabortal endometritis, then outpatient treatment with oral antibiotics is appropriate.

For women with pregnancies > 12 weeks in size and a fetal demise, incomplete abortion, or inevitable abortion has been diagnosed, management options include surgical evacuation of the uterus or induction of labor in the inpatient setting. The need for emergent treatment would be based on the patient’s signs and symptoms. Expectant management would not be advised.

If the patient is hemodynamically stable with known incomplete, inevitable, or missed abortion less than 12 weeks in size and without infection, there are 3 potential management pathways: expectant, medical, and surgical. (See Table I. Treatment Options for Spontaneous Abortion.)

Expectant management: This strategy allows the spontaneous passage of the products of conception. It may take 4 to 6 weeks for passage to occur and the timing is unpredictable. The efficacy is higher with incomplete abortion (91%) compared with embryonic or fetal demise (76%) and anembryonic pregnancy (66%). These success rates reflect waiting up to 4 weeks for passage of the pregnancy. Success rates will be lower if only 1 to 2 weeks are allowed. Some women prefer this option because it is perceived as more natural and the risks of surgery and anesthesia are avoided. Women can change their minds and switch to medical or surgical management at any time. Follow-up should include documentation of complete abortion.

The most commonly accepted regimen is 800 mcg of misoprostol vaginally (with a repeat dose as needed). In one large trial, this regimen was found to be 71% effective with one dose, which increased to 84% after 2 doses. Success rates were 93% for incomplete or inevitable abortion, 88% for embryonic or fetal demise, and 81% for anembryonic gestation. Side effects of misoprostol include nausea, vomiting, fever, chills, and diarrhea.

Women should expect a longer duration of bleeding with medical management compared to surgical management, on average 2 weeks, but this bleeding rarely requires surgical intervention. Protocols for misoprostol treatment include follow-up to document complete abortion with either repeat ultrasound documenting absence of the gestational sac or serial b-hCG levels (decrease in b-hCG of 80% at one week following passage of tissue).

Contraindications to medical management with misoprostol:

Medical management: Side effects of misoprostol; pain and bleeding associated with passage of the products of conception; potential need for emergent surgical evacuation

Surgical management: Risks of suction D&C including bleeding, infection, retained POCs, injury to the cervix, uterus, or other internal organs, intrauterine synechiae (Asherman’s syndrome), and the risks of anesthesia

Rh(D) immune globulin (Rhogam) should be given to Rh (D) negative mothers. Grief counseling should be offered as appropriate. Menses should return 4 to 6 weeks after the passage of products of conception or surgical evacuation of the uterus. Contraception, if desired, can be started immediately after complete abortion is documented. Most providers counsel women to have nothing per vagina, including sexual activity and tampons, for at least 2 weeks. Women can attempt to conceive again as soon as they feel emotionally and physically ready.

What are the possible outcomes of spontaneous abortion?

Spontaneous abortion is very common, occurring in up to 20% of all pregnancies. Eighty percent of these losses occur in the first trimester. Once a fetal heart is documented, the risk of SAB drops to about 5%-10%, depending on maternal age. Approximately 1 in 4 women will experience a miscarriage in her lifetime.

The most important risk factors for SAB are increasing maternal age and previous SAB. Other risk factors include heavy smoking, moderate to high alcohol consumption, cocaine, and possibly NSAIDs. Being extremely underweight or overweight has also been associated with SAB.

Congenital anomalies and trauma, including invasive procedures such as CVS and amniocentesis, can also cause SAB.

Finally, some spontaneous abortions are unexplained.

Progesterone generally remains constant during the first trimester and is not specific to gestational age like b-hCG values. However, it can be an adjunct in evaluating normal and abnormal pregnancy. Levels less than 5 ng/ml are 100% specific for abnormal pregnancy—either nonviable intrauterine pregnancy or ectopic pregnancy. Values greater than 20-25 ng/ml have a 100% positive predictive value for normal pregnancy. Many values remain in the indeterminate range (5-20 ng/ml) and are not particularly useful in determining a clear diagnosis.

How can spontaneous abortion be prevented?

Although most SABs are caused by random chromosomal abnormalities that arise in the embryo and are therefore unpreventable, preconception health should be optimized in order to reduce the chances of a future SAB. This may include avoiding tobacco, moderate to heavy alcohol use, cocaine, and NSAIDs when trying to conceive. Women should aim to achieve a healthy body weight prior to conception and should be consuming a daily multivitamin with folic acid (400 to 800 mcg) daily.

If a woman is taking a teratogenic medication, she should be transitioned to an alternative prior to conception.

Finally, women with medical problems such as diabetes mellitus, hypertension, lupus, and thyroid disease should have their disease under control prior to conception. 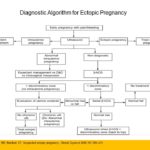