The radial nerve carries both motor and sensory nerve fibers from the brachial plexus into the distal forearm and hand. During its winding path there are multiple areas of compression that may impinge upon the radial nerve causing distinct symptoms depending on the point of compression. Interestingly, compression of the posterior interossesous nerve (PIN) within the radial tunnel can cause two contrasting syndromes known as PIN syndrome and radial tunnel syndrome (RTS). Within the radial tunnel there are multiple potential areas of compression including the leash of Henry, the extensor carpi radialis brevis (ECRB) muscle, fibrous bands between the brachialis and brachioradialis muscles, the distal edge of the supinator muscle, mass occupying lesions (lipomas, ganglions, etc.), and most commonly the Arcade of Frohse.

Radial nerve entrapment commonly occurs in patients who participate in occupational and recreational activities. Patients that present with symptoms of radial tunnel syndrome (RTS) can be difficult to evaluate. Typically, patients will have intense pain over the lateral epicondyle that radiates distally and radially towards the radial styloid and thumb. Additionally, patients will often complain of pain over the mobile wad that is exacerbated with physical activity, especially lifting activities and activities involving forearm rotation, especially with elbow extension, wrist flexion, and forearm pronation, i.e. opening door knobs.

Separating these symptoms from those of lateral epicondylitis can be difficult and challenging and even 5-10% of patients can present with concomitant RTS and lateral epicondylitis. The initial evaluation including history and physical exam is crucial in properly treating these patients as most imaging modalities will not reveal any abnormalities. Interestingly, the history of patients with RTS will not involve any weakness, inability to grip or hold on to objects, or difficulty extending the wrist or fingers as this is the typical presentation of PIN syndrome, which involves that same nerve and area of entrapment but with purely motor symptoms.

Interestingly, it has been the experience of this author that the epicenter of painful stimulus can be located by taking 80% of the transepicondylar distance (the distance between the medial and lateral humeral epicondyles) and applying pressure at this distance from the lateral epicondyle pointing towards the radial styloid. Additionally, pain can often be reproduced with resisted supination, passive pronation with wrist flexion, or resisted long finger extension, which is in direct contrast to resisted wrist extension, which is typically a symptom of lateral epicondylitis.

Once the practitioner suspects RTS, the most specific test used to identify its presence is the administration of a local corticosteroid into the radial tunnel with relief of symptoms. When this is performed, it has been suggested that the use of a short-acting local anesthetic can be used to help determine correct placement by producing a confirmatory transient PIN palsy. Imaging and electromyogram/nerve conduction (EMG/NC) studies have minimal roles in the evaluation of RTS.

Magnetic resonance imaging (MRI) is not typically indicated for RTS however may show a space occupying lesion (tumor, lipoma, ganglion, bursitis, etc.) or evidence of lateral epicondylitis. In the event of PIN syndrome a lipoma should be of high suspicion and a MRI obtained to rule this out. EMG and NC studies are typically inconclusive as sensory nerve fibers are not evaluated on these studies. However, they may show in rare instances either undetected PIN syndrome or evidence of cervical radiculopathy.

Treatment of RTS syndrome is a difficult task. No good studies have been undertaken to determine the best treatment algorithm for RTS syndrome. Typically, treatment begins conservatively with activity modification, non-steroidal anti-inflammatory drugs (NSAIDs), stretching, and static splinting. Patients should avoid positions that place the elbow into extension, the wrist into flexion, and the arm into pronation, much like typing on a keyboard.

Numerous surgical techniques have been described for surgical exploration and surgical determination of the site of radial nerve compression. Of those described, the brachioradialis splitting approach is typically the most utilized.

In this author’s practice:

Pearls and Pitfalls of Technique

There are no currently accepted/published post-operative protocols for radial tunnel rehabilitation. The use of post-operative splinting in supination may help to decrease symptoms in the immediate post-operative period when swelling is expected to be a major contributor to continued symptoms. Otherwise, after healing has occurred, the patient may be released to gradually increase their activity. Some patients may require rehabilitation with gradual stretching and strengthening exercises due to either prolonged immobilization causing continued weakness or disuse from the clinical entity itself.

Radial tunnel release has been shown in numerous studies to be effective in relieving symptoms in 67-92% of patients, however subsequent studies have revealed only 40% patient satisfaction with their surgery and even worse satisfaction if corresponding litigation or worker’s compensation claims are active. Of recent note, the treatment of RTS syndrome can be troublesome with the possibility of concomitant disease processes such as lateral epicondylitis, cervical radiculopathy, and double crush phenomena all having equally poor outcomes.

Huisstede, B.. “Interventions for Treating the Radial Tunnel Syndrome: A Systematic Review of Observational Studies”. The Journal of Hand Surgery. vol. 33. 2008. pp. 72.e71-72.e10.

Patients presenting with signs of symptoms of RTS should have a thorough history and physical performed, focusing on site of pain, movements exacerbating symptoms, and possible alternative diagnoses or concomitant disease processes. Patients with radial tunnel syndrome should initially be treated conservatively with activity modification and possibly splinting. Should these fail treatment, steroid injections may be entertained to both treat and diagnose the problem. Prior to surgical intervention, alternative diagnoses and concomitant disease processes should be investigated prior to surgical intervention. Ultimately, surgical treatment can be performed if adequate symptom relief fails to be achieved with non-operative methods. Radial tunnel release surgery has been shown to be effective in relieving symptoms however many patients may continue to be dissatisfied, especially if corresponding litigation or worker’s compensation claims are present.

Jump to Section
Next post in Shoulder and Elbow 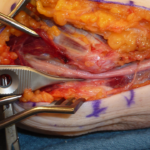