Hypercalcemia of malignancy is the cause of this patient’s nausea/vomiting and changes in mental status. Malignancy-associated hypercalcemia is a common paraneoplastic syndrome seen especially in individuals with non-small cell carcinoma. It is estimated to occur in 20% to 30% of all cancer patients during the course of illness and is often a sign of poor prognosis. In most cases, the pathophysiology is increased bone resorption caused by either extensive local bone destruction or humoral factors. The spectrum of clinical manifestations may range from few or no symptoms in patients with mild chronic hypercalcemia to severe obtundation and coma. The degree of hypercalcemia, along with the rate of rise of serum calcium concentration, often determines symptoms and the urgency of therapy. The therapeutic approach is dictated by the severity of symptoms and degree of hypercalcemia.

In this patient, the differential diagnosis could have included the following: nausea/vomiting due to cisplatin administration, renal impairment, or drug-induced secondary to the dopamine antagonist prochlorperazine. However, after reviewing the laboratory values, it is apparent the patient has hypercalcemia.

Corrected calcium is calculated by adding the measured total calcium (mg/dL) + 0.8(4.0-serum albumin). It is essential to correct for calcium in patients who have an albumin level of less than 4.0 g/dL. In this patient, the corrected calcium is 15.28mg/dL. A normal calcium level is 8.5-10.5mg/dL. Therefore, based on the level and symptoms, the hypercalcemia is severe and requires immediate management.

In general, hydration is the initial therapy of choice because many symptoms are caused by dehydration. Its mechanism of action is by dilutional effect as dehydration is corrected, which then works by increasing renal calcium excretion. Its onset varies from minutes to hours. Typically, a rate of between 200 and 400mL/hr of normal saline may be administered initially and then adjusted to maintain the urine output at 100 to 150mL/hr. Calcitonin 4 IU/kg IM or SQ q12h – max 8 IU/kg q6h can also be considered because it has a rapid onset of action of 1 to 4 hours, with peak effects occurring in 4 to 6 hours.

Lung Cancer
Next post in From The Advisory Board 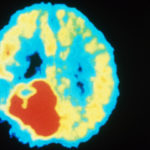