The first-in-class, oral, potent, and selective small-molecule competitive inhibitor of anaplastic lymphoma kinase (ALK), crizotinib, was found to have a durable overall response rate (ORR) and a median progression-free survival (PFS) of 8.1 months in patients with ALK-positive non–small-cell lung cancer (NSCLC), according to results of a global phase 2 study1 presented at the 2012 American Society of Clinical Oncology (ASCO) Annual Meeting.

Crizotinib, which also has anti-MET and reactive oxygen species (ROS) activity,2 was approved in August 2011 in the United States for the treatment of patients with locally advanced or metastatic NSCLC that is ALK-positive, as detected by a U.S. Food and Drug Administration-approved fluorescence in-situ hybridization (FISH) break-apart assay. This indication is based on response rate.3

Previously, results of the PROFILE 1001 expanded cohort study of crizotinib 250mg twice daily showed an objective response rate of 61%, a median PFS of 10 months, and a median duration of response of 48 weeks, and the agent was generally well tolerated,7 he reported.

At ASCO, Dr. Kim presented updated results from PROFILE 1005, an ongoing, multicenter, single-arm phase 2 study of crizotinib in previously treated patients with ALK-positive advanced NSCLC. Efficacy data were presented for the “mature population,” defined as patients ALK-positive by the central laboratory using break-apart FISH test, and safety and patient-reported outcomes data were reported for the overall population, which includes those ALK-positive by local testing.

Male or female patients aged ≥18 years with ALK-positive advanced NSCLC with measurable lesions whose disease had progressed despite being treated with at least one line of chemotherapy were eligible to receive oral crizotinib (250mg, twice daily, in 21-day cycles). ALK-positivity was determined by a central laboratory using break-apart FISH; FISH-positive cases were defined as having ≥15% split signals in 50 counted tumor cells.9 During the study, a protocol amendment enabled patients to be enrolled who were determined to be ALK-positive by either FISH, IHC, or PCR at a local level and who were approved on a case-by-case basis. Patients with brain metastases were eligible if asymptomatic or, if treated, were required to be neurologically stable for at least 2 weeks.

Antitumor efficacy was evaluated by RECIST10 at baseline and every 6 weeks, with bone scans performed every 12 weeks, if required, until radiographic progressive disease (PD) was documented. Patients with RECIST-defined PD could continue on treatment if the investigator determined they would continue to derive clinical benefit.

Patient-reported symptoms and global quality of life (QoL) were assessed using the EORTC QLQ-C3011 and LC-1312 at baseline, day 1 each cycle, and at end of treatment. Clinically meaningful change was defined as a ≥10 point mean change from baseline.13 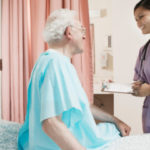