Neratinib, an irreversible pan-HER tyrosine kinase inhibitor, has shown clinical efficacy in patients with HER2-positive metastatic breast cancer who were pretreated with trastuzumab.

Among patients with HER2-positive early breast cancer, a significant proportion of patients recur with invasive disease, despite trastuzumab-containing adjuvant therapy.

Dr. Chan said a global amendment to the study reduced follow-up to 2 years from study entry; however, a current amendment restored the original 5-year follow-up.

Between July 2009 and October 2011, the study investigators randomly assigned 2,821 patients to either neratinib (1,409 patients) or placebo (1,412 patients). Median time from last dose of trastuzumab was 4.4 months in the neratinib arm and 4.7 months in the placebo arm. Baseline characteristics were balanced between arms.

The most common adverse event (AE) in the neratinib arm was diarrhea; 40% had grade 3 diarrhea and 1 patient had grade 4; however, it primarily occurred within the first 30 days of treatment and was manageable. Dr. Chan recommended intensive prophylaxis with loperamide to reduce the incidence of diarrhea.

Mean relative dose intensity was 88% in neratinib-treated patients compared with 98% among those who received placebo. 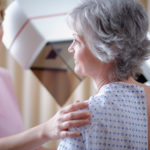