Paclitaxel plus olaparib may result in a higher pathological complete response (pCR) rate than paclitaxel plus carboplatin — followed by epirubicin and cyclophosphamide — but only in some groups of patients, according to a study in patients with HER2-negative early breast cancer and homologous recombination deficiency (ClinicalTrials.gov Identifier: NCT02789332). The findings of the study, which was conducted in Germany, were presented at the 2019 American Society of Clinical Oncology (ASCO) Annual Meeting in Chicago, Illinois.

Between September 2016 and July 2018, the investigators randomly assigned 102 patients — whose median age was 47 years — to receive either paclitaxel 80 mg/m² weekly plus olaparib 100 mg twice daily for 12 weeks or paclitaxel 80 mg/m² weekly plus carboplatin AUC2 weekly for 12 weeks; both treatments were followed by epirubicin and cyclophosphamide.

There were 65 patients in the olaparib group and 37 patients in the carboplatin group. The researchers stratified randomization by the participants’ hormone receptor-status — HR+ versus HR- — and by age — younger than 40 years versus 40 years and older. The study’s primary end point was pathological complete response. The researchers planned a one group χ2-test to exclude the pCR rate of 55% or less in the group that received paclitaxel plus olaparib.

However, the results of the trial could not exclude a pCR rate of 55% or less in the group that received paclitaxel plus olaparib, the researchers concluded.

Among HR- patients and among those 40 years or older, these differences were small, said lead study author Peter A. Fasching, MD, of University Hospital Erlangen in Germany.

“In the subgroup analyses, which are of course hypothesis-generating, we could see a pronounced effect in favor of the olaparib,” Dr Fasching said.

“Of course, we think the results are good enough to pursue this treatment further in the neoadjuvant setting,” Dr Fasching said. “And we are currently working on further translational research projects.” 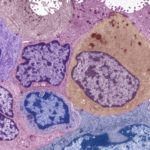