Although immune checkpoint inhibitors have generally improved outcomes for many patients with NSCLC, most patients with advanced disease develop resistance to these treatments. Furthermore, few treatment options are available in this setting.

There is, however, evidence that combining immune checkpoint inhibitors with VEGF/VEGF receptor inhibitors may be effective in this patient population. For this sub-study of the LUNG-MAP protocol, researchers evaluated combination pembrolizumab plus ramucirumab among patients with stage IV disease who had previously been treated with an immune checkpoint inhibitor (ClinicalTrials.gov Identifier: NCT03971474).

The results showed that pembrolizumab plus ramucirumab improved OS (hazard ratio, 0.69; P =.05). The median OS was 14.5 months with the experimental combination and 11.6 months in the standard care arm. All subgroups, including patients with co-mutations and regardless of PD-L1 status, had hazard ratios of less than 1 in the experimental arm.

There was, however, no significant difference in progression-free survival or overall response rates between the treatment arms.

Grade 3 or higher treatment-related adverse events occurred more often in the standard of care arm (60%) than in the pembrolizumab-ramucirumab arm (42%).

Disclosures: This research was supported, in part, by Eli Lilly and Company and Merck & Co Inc. Some study authors declared affiliations with biotech, pharmaceutical, and/or device companies. Please see the original reference for a full list of disclosures. 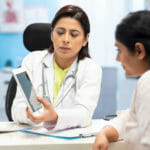