Patients with early breast cancer who are not represented in clinical trials have an increased risk of mortality at 5 years, a new study suggests.

These findings were presented at the 2021 American Society of Clinical Oncology (ASCO) Quality Care Symposium1 and published simultaneously in JCO Oncology Practice.2

The study included 11,770 patients from the CancerLinQ Discovery database who were diagnosed with early-stage breast cancer between 2005 and 2015 and received 1 of 7 common chemotherapy regimens.

The cohort included 5624 patients (48%) who were considered well-represented in clinical trials. Well-represented patients were White, aged 45 to 69 years, and did not have any comorbidities or a concurrent cancer.

There were 5267 underrepresented patients (45%). This group included Black and Indigenous people of color, patients younger than 45 years of age, and patients age 70 or older.

The remaining 879 patients (7%) were categorized as unrepresented in trials. These patients had comorbidities or concurrent cancers.

The unrepresented patient population had a significantly increased risk of death at 5 years compared with the well-represented population (hazard ratio [HR], 2.71; 95% CI, 2.08-3.52).

Disclosures: One of the study authors declared affiliations with biotech, pharmaceutical, and/or device companies. Please see the original reference for a full list of disclosures. 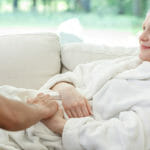 Predicting End of Life for Patients With Metastatic Breast Cancer