Older adults (OAs) and patients with an Eastern Cooperative Oncology Group (ECOG) performance status higher than 1 were less likely than their younger peers to receive second-line therapy for metastatic colorectal cancer (mCRC), an analysis of 10 first-line trials from the Analysis and Research in Cancers of the Digestive System (ARCAD) Clinical Trials Program revealed.

The review included an examination of 5289 patients from the database of trials in advanced colorectal cancer to see if there were differences in the receipt of second-line therapies between older adults and younger adults with mCRC following disease progression. Among these patients, 16.4% were classified as older adults.

The investigators also compared time to initial progression (TTiP), time to progression, and overall survival across groups, adjusting for age, sex, ECOG performance status, the number of metastatic sites present, as well as for the evidence of metastatic lesions in the lungs, liver, or peritoneum.

However, even though the odds of receiving a second treatment were higher for younger patients compared with older patients, the higher frequency of receipt of later-line medication did not appear to meaningfully influence large differences in median TTP (5.2 months vs 5.1 months, respectively) nor mean overall survival (12.4 months vs 11.6 months, respectively) between patients subsets.

The authors noted that future research should examine the influence of factors such as patient comorbidity and functional status on survival outcomes, and researchers should consider incorporating a geriatric assessment tool to guide the selection of older adults who would be most likely to benefit from second-line therapy in mCRC.

Disclosure: This study was funded by the National Cancer Institute at the National Institutes of Health’s Gastrointestinal Specialized Programs of Research Excellence (SPORE) and Dana–Farber/Harvard Cancer Center. 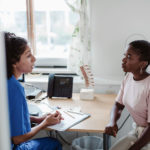