NEW ORLEANS—A study designed to determine the optimal duration of rituximab maintenance in patients with follicular lymphoma has found median progression-free survival (PFS) doubles when treatment is continued to a maximum of 5 years, according to results presented at the 55th American Society of Hematology Annual Meeting and Exposition.

From October 2004 to November 2007, 165 patients who had a complete or partial response to this induction regimen were randomly assigned to receive rituximab 375 mg/m² short-term maintenance, either four administrations every 2 months (arm A; n = 82), or long-term maintenance every 2 months for a maximum of 5 years or until disease progression or unacceptable toxicity (arm B; n = 83). A total of 124 patients were chemotherapy-naïve.

Primary end point was event-free survival (EFS) from randomization. Events included disease progression or relapse, unacceptable toxicity, death from any cause, initiation of non-protocol or concomitant steroids or radiotherapy, or secondary malignancy.

Results showed median EFS to be 3.4 years (95% CI: 2.1-5.3 years) in arm A, and 5.3 years (95% CI: 3.5 years-NA) in arm B. However, “using the prespecified log-rank test, this difference is statistically not significant (P = 0.14),” Dr. Taverna said. “We observed an unexplained difference in disease progression and relapse during the first 8 months after randomization (3 in arm A vs. 10 in arm B) when treatment in both arms was the same, which led to an early crossing of the EFS curves at 18 months.”

In arm A, the short-term maintenance group, 41 patients (50%) experienced at least one adverse event (AE). Only one patient had infection grade 3 or higher and six had secondary malignancy. In arm B, the long-term maintenance group, 63 patients (76%) had at least one AE; 12 with grade 3 and two with grade 4, with five patients having infection grade 3 or higher. Secondary malignancy occurred in eight patients. 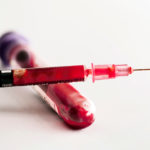