“These results support the use of MRD for response evaluation,” said Barbara Eichhorst, MD, of the Department I of Internal Medicine and Center of Integrated Oncology Cologne Bonn, University Hospital in Cologne, Germany. Analysis of the German CLL Study Group trials also found that the persistence of splenomegaly as a sole abnormality after treatment in MRD-negative patients had no corresponding negative influence on PFS.

Currently, the detection of MRD—recommended for clinical trials—is not formally included in the definition of CLL response assessment. To investigate its value in the context of clinical response, MRD status was explored in 555 patients with complete response (CR) and partial remission (PR) from two trials, one investigating fludarabine and cyclophosphamide with or without rituximab (FCR) and the other investigating FCR versus bendamustine and rituximab.

Of the 161 patients with a MRD-negative PR, 25 had only lymphadenopathy; 18 had only bone marrow involvement; and 78 had only splenomegaly; 40 had more than one abnormality.

More data are needed to provide the relevance of residual bone marrow involvement and lymphadenopathy in MRD-negative patients with PRs, Dr. Eichhorst concluded. 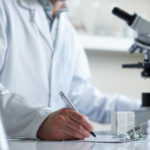