SAN DIEGO — It is well known by many of the attendees at the 2018 American Society of Hematology (ASH) Annual Meeting and Exposition that chimeric antigen receptor T-cell (CAR-T) therapies are still a hot topic — but this year, many more studies are accruing new data about T-cell exhaustion, resistance mechanisms in CAR-T, enrichment of certain populations of T cells to enhance efficacy or persistence in CAR-T, CAR-Ts directed at multiple antigens, and reports of relapse in patients who at one point, demonstrated what appeared to be complete, durable responses to these cell therapies.

B-cell maturation antigen (BCMA)-directed CAR-T constructs are also not new this year — they seem to be everywhere at the meeting, especially when it comes to multiple myeloma (MM). Allogeneic CARs are here too, but there are far fewer examples of anti-BCMA CAR-T therapies under investigation in MM that are being developed to be off-the-shelf options. The only ASH buzzword box this item does not check is the BiTE box.

One example of an allogeneic, BCMA-directed CAR-T that is being highlighted, however, comes from Allogene Therapeutics (also listed on the abstract are authors from Pfizer and Cellectis). Allogene’s Cesar Sommer, PhD, highlighted ALLO-715, an allogeneic BCMA CAR-T under investigation in MM.

Dr Sommer described a CAR-T with a fully human scFv that has specificity for BCMA. The results “support the clinical evaluation of ALLO-715 for multiple myeloma,” he said, and disclosed a plan to submit an investigational new drug (IND) application to the US Food and Drug Administration and the initiation of a phase 1 trial in 2019.

According to Dr Sommer, ALLO-715 has a lower potential for the graft-vs-host disease (GvHD) that is characteristic of the receipt of cells from donors. This has been designed with a gene knockout mechanism in place that is meant to eliminate the chance of resistance to lymphodepleting anti-CD52 antibodies. This TALEN-supported feature reportedly will help avoid the product’s rejection by host T cells expressing CD52. Dr Sommer said Allogene is developing its own anti-CD52 antibody, ALLO-647, as a complement therapy. (Alemtuzumab is an example of an existing anti-CD52 monoclonal antibody.) When an attendee asked about the planned dose for ALLO-647, Dr Sommer said it would be a lower dose than that seen with commercial alemtuzumab; an “opportunistic” dose.

ALLO-715 also purportedly features “dose-dependent antitumor activity in vitro and in orthotopic models of multiple myeloma” and a suicide mechanism: this “off” safety switch, which is said to be inducible by rituximab administration, is a built-in mechanism that “mediates effective depletion” of CAR-Ts circulating in a patient’s body. The construct comes equipped with rituximab recognition domains. This means that if a serious reaction, such as cytokine release syndrome (CRS), occurs in a patient as a result of ALLO-715 administration, giving the patient rituximab “depletes BCMA CAR-T in vivo and abrogates antitumor activity.”

The “on-demand” feature of ALLO-715, besides being touted as being made with uniform starting material — which could address the problem seen with some patients who are eligible for CAR-T, are pheresed, but never dosed — is thought to add various efficiencies. For example, production can be scaled to help reduce the high cost of CAR-T, which has already caused concern among the stakeholders in the health care continuum.

In addition, Dr Sommer noted the investigational agent, which he mentioned has “comparable activity” to the CARs that have shown activity in the clinic, preserves its antitumor activity in commercial good manufacturing practice settings, suggesting it would also be feasible to produce on a large scale. Plus, emphasized Dr Sommer, it has the potential to treat approximately 100 patients from one manufacturing run. An audience member questioned that number of doses, asking, “Won’t the cells get exhausted?” Dr Sommer replied: “It is clear you will get many vials” from a single manufacturing run. 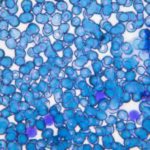