An increase in endometrial cancer incidence among young adult women in the United States coincides with an increase in the prevalence of obesity in this population, according to researchers.

They presented their findings in a poster at the 2021 American Society of Clinical Oncology (ASCO) Annual Meeting.

The data from the National Health and Nutrition Examination Surveys revealed a significant increase in the prevalence of obesity among women aged 18 to 34 years from 1988 to 2014.

The incidence of endometrial cancer and the prevalence of obesity were both higher among Hispanic women compared with women from other racial and ethnic groups.

“The significant increasing incidence in endometrial cancer among young adult women is in accordance with the concurrent increasing prevalence in obesity in young girls and women in the US,” the researchers wrote in their poster. “This indicates that endometrial cancer screening might need to be considered at a much earlier age among patients with abnormal bleeding and certain ethnic populations.”

Disclosures: This research was supported by the National Cancer Institute. The study authors reported having no disclosures. 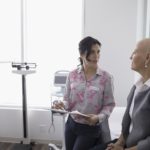