Investigators defined median duration of follow-up as the time from randomization to the database cutoff date. At the data cutoff, 418 patients had died — 193 (44.7%) in the pembro- axi arm and 225 (52.4%) in the sunitinib arm. No new safety signals were identified.

Findings from the new analysis, done at a median follow-up of 42.8 months, reinforced that the combination therapy “is an acceptable front-line standard,” investigator Brian I. Rini, MD, of Vanderbilt University Medical Center in Nashville, Tennessee, stated in an interview.

The rate of treatment discontinuation was higher in the sunitinib arm than in the pembro-axi arm (90.6% vs 81.4%), as was the proportion of patients who received subsequent therapy (73.0% vs 58.4%).

Asked if he had any advice for clinicians prescribing pembro-axi, Dr Rini emphasized that axitinib is an important part of the treatment, and clinicians should resist a temptation to discontinue it early.

As with other tyrosine kinase inhibitors, axitinib can be titrated up and down easily to arrive at what is tolerable for patients in the short and long term, he explained. Studies have established that dual therapy is better than single therapy, so “it is worth putting in the effort to keep patients on both drugs,” Dr Rini said.

Disclosures: This research was supported by Merck Sharp & Dohme Corp., a subsidiary of Merck & Co., Inc. Some study authors declared affiliations with biotech, pharmaceutical, and/or device companies. Please see the original reference for a full list of disclosures. 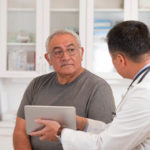