Adding nab-paclitaxel to combination treatment with gemcitabine and cisplatin does not improve outcomes for patients with newly diagnosed, advanced biliary tract cancers, a phase 3 trial suggests.

Nab-paclitaxel did not improve the response rate, progression-free survival (PFS), or overall survival (OS) in this trial. These findings were presented at the 2023 ASCO Gastrointestinal Cancers Symposium by Rachna T. Shroff, MD, of the University of Arizona Cancer Center in Tucson.

Patients in the triplet arm received gemcitabine at 800 mg/m2, cisplatin at 25 mg/m2, and nab-paclitaxel at 100 mg/m2 on days 1 and 8 of a 21-day cycle. Patients in the control arm received gemcitabine at 1000 mg/m2 and cisplatin at 25 mg/m2 on days 1 and 8. In both arms, patients were treated until disease progression or intolerance.

The overall response rate was 31% in the triplet arm and 22% in the control arm. Disease control rates were 77% and 69%, respectively. Neither difference was significant.

Analyses of OS and PFS by disease site did not reveal significant differences between the treatment arms. However, among patients with locally advanced disease, the median OS and PFS were significantly longer with the triplet vs the doublet. The median OS was 19.2 months and 13.7 months, respectively (P =.01). The median PFS was 9.3 months and 7.6 months, respectively (P =.04).

Common grade 3-4 treatment-related adverse events (in the triplet and control arms, respectively) were anemia (33% and 22%), neutropenia (37% and 28%), thrombocytopenia (20% and 15%), and leukopenia (25% and 10%). Treatment discontinuation rates did not differ significantly between the arms. 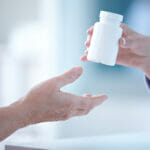