A supplemental radiation dose given concurrently with hypofractionated whole-breast irradiation (WBI) produces comparable results as a sequential supplemental dose given after conventional WBI in patients with high-risk early-stage breast cancer, according to a phase 3 trial.

The study showed that in-breast recurrence, cosmesis, and toxicity outcomes were similar with the concurrent radiation boost and the sequential boost. However, the concurrent boost reduced treatment time.

These results were presented at the 2022 ASTRO Annual Meeting by Frank A. Vicini, MD, of Michigan Healthcare Professionals in Farmington Hills.

The other arm received hypofractionated WBI at 40 Gy in 15 fractions plus a concurrent boost of 48 Gy (n=1138). In both arms, patients received either target-based 3-dimensional conformal radiation or intensity-modulated radiation therapy.

There were no significant differences in treatment-related adverse events (TRAEs) between the 2 arms. Grade 3 or higher TRAEs occurred in 3.3% of patients in the sequential boost arm and 3.5% of those in the concurrent boost arm. 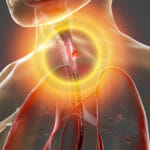