“SBRT should be a standard treatment option in the toolkit of treatments for patients with hepatocellular carcinoma, especially those with macrovascular invasion who really are in desperate need of improved treatments,” said study presenter Laura A. Dawson, MD, of Princess Margaret Cancer Center in Toronto, Ontario, Canada.

Dr Dawson and colleagues conducted this phase 3 trial (NRT/RTOG 1112; ClinicalTrials.gov Identifier: NCT01730937) in 177 patients with locally advanced HCC. The patients were unsuitable for, refractory to, or had disease recurrence after resection, radiofrequency ablation, or transarterial chemoembolization.

At baseline, the median age was 66 years (range, 27-84), and 85% of patients were men. Forty-one percent of patients had hepatitis C, 74% had macrovascular invasion, and 82% had BCLC stage C disease.

The trial was closed to accrual early due to the change in standard-of-care systemic therapy for HCC.

Dr Dawson pointed out that patients with more advanced HCC, including those with macrovascular invasion, tended to derive a greater benefit from the addition of SBRT to sorafenib.

The rate of grade 3 or higher treatment-related adverse events (TRAEs) was 42% with sorafenib alone and 47% with SBRT plus sorafenib. The most common grade 3 or higher TRAEs in the SBRT arm were aspartate transaminase elevation (n=5) and platelet level decrease (n=6).

There were 2 fatal TRAEs in the sorafenib-alone arm (hepatic failure and death not otherwise specified) and 1 in the SBRT arm (lung infection).

“In patients with advanced hepatocellular carcinoma, compared to sorafenib alone, SBRT prior to sorafenib improved overall survival, progression-free survival, and time to progression, with no concerning increase in adverse events,” Dr Dawson concluded. 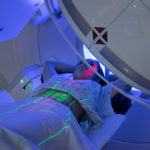