Response-adapted ultra-low-dose radiation therapy (ULD RT) is effective and results in negligible toxicity in patients with orbital indolent B-cell lymphoma (BCL), according to research presented at the 2022 ASTRO Annual Meeting.

This treatment approach can provide excellent local control but can result in substantial toxicity, she said. “Even with moderate doses of 24-25 Gy, ocular side effects are common, including cataract and dry eye,” Dr Pinnix added.

The study included 50 evaluable patients with stage I-IV orbital indolent BCL. The median age at baseline was 63 years (range, 29-88), and 62% were women. Most patients (64%) had MALT lymphoma, 24% had follicular lymphoma, and 12% had low-grade BCL. A majority of patients (72%) had newly diagnosed disease, and 62% had stage I disease.

At a median follow-up of 37.5 months, 90% of patients had a CR to adapted ULD RT. Of the 45 patients with a CR, 44 responded to ULD RT alone, and 1 was treated with 20 Gy for persistent disease. There were 6 patients who were eligible for an additional 20 Gy.

The 2-year local control rate was 89.4%. There were 5 local control events, but there were no local recurrences in the 45 patients who achieved a CR.

The 2-year overall survival rate was 98%. There were no known deaths due to lymphoma. The 3 deaths were due to metastatic breast cancer, dementia, and unknown reasons.

Toxicity after ULD RT was limited, Dr Pinnix said. There were 3 patients (6%) who experienced grade 1 dry eye. One patient had cataract removal from both eyes for known cataracts 7 months after RT.

“There are several benefits to this approach, including the decreased toxicity, the convenience for our patients, the decreased cost of therapy,” Dr Pinnix said. “Patients that require systemic therapy for extra-orbital disease can quickly pursue it after completion of this treatment.”

Dr Pinnix noted, however, that additional research is needed, and additional follow-up is required to confirm durable local control.

and/or device companies. Please see the original reference for a full list of disclosures. 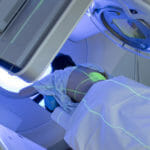 SBRT for Oligoprogression Improves Outcomes in NSCLC but Not Breast Cancer