The retrospective analysis included men aged 50 years and older with prostate cancer from the University of California, San Francisco Cancer of the Prostate Strategic Urologic Research Endeavor (CaPSURE), a nationwide, longitudinal observational study that includes 43 primarily community-based urology practices in the United States. The primary outcome was the onset of dementia after prostate cancer treatment.

ADT exposure was expressed as a time-varying independent variable of total ADT exposure throughout the follow-up period. Patients with dementia were identified with use of International Classification of Diseases, 9th revision/Common Procedural Terminology codes.

The probability of receiving ADT was estimated with the use of a propensity score, and Cox proportional hazards regression was conducted to assess the association between ADT exposure and dementia with competing risk of death, adjusted for propensity score and clinical covariates.

In a subset of 8506 men who were propensity score–matched by whether they had received any ADT, the association between ADT use and dementia (HR, 1.59; 95% CI, 1.03-2.44; P =.04) remained significant. The primary treatment type was not associated with dementia onset among the 8489 men who did not receive ADT.

“This increased risk [of dementia] should be accompanied by a careful and complete discussion of the needs and benefits of ADT in those being considered for such treatment,” the researchers commented. 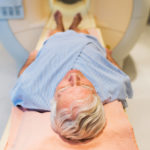