The results are based on an analysis of 26 patients with complex biopsy-proven clear cell renal cell carcinoma tumors in the single-arm PADRES (Prior Axitinib as a Determinant of Outcome of Renal Surgery; NCT03438708). All had strong indications for PN and faced the risk of dialysis dependence if they underwent radical nephrectomy (RN).

Patients had a median age of 69 years and a median follow-up of 12 months. Axitinib 5 mg was administered orally twice daily for 8 weeks prior to surgery. The primary outcome was reduction in longest tumor diameter based on imaging criteria and achievement of PN. Secondary outcomes included preservation of renal function.

With regard to the primary outcomes, axitinib resulted in significant reductions in median tumor size from 7.7 cm pre-axitinib to 6.3 cm post-axitinib and RENAL score (11 vs 10), lead author Kevin Hakimi, BS, a medical student at the UC San Diego School of Medicine in La Jolla, California, reported on behalf of his research team. Surgeons performed PN in 20 patients (76.9%), with a median ischemia time of 34 minutes, and RN in 5 patients. All RN patients had at least T3a tumors on final pathology.

Of the 26 patients, 25 (96.8%) had negative surgical margins. Most patients had adequate preservation of renal function. The median change in estimated glomerular filtration rate from before surgery to 1 month after surgery was 4.5 mL/min/1.72 m2. In addition, 2 out of 26 (7.8%) patients had 50% or greater reduction in renal function, with 1 patient (3.8%) becoming dialysis dependent following RN.

Accrual into the study is ongoing with a target of 50 patients.

Disclosures: The study is being funded by Pfizer, which markets axitinib. 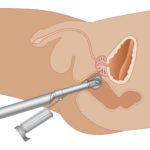