In a study of 1385 patients who underwent RPN, Sij Hemal, MD, of the Glickman Urological & Kidney Institute at Cleveland Clinic in Ohio, and colleagues found that patients with PSMs had a significantly greater incidence of pT3a pathology (30% vs 10%), lymphovascular invasion (5.7% vs 1.0%), and perirenal fat involvement (12.5% vs 3.4%) on final pathologic examination compared with those who had negative surgical margins (NSMs).

Further, patients with PSM had significantly higher rates of local recurrence (6.0% vs 2.3%) and distant metastasis (6.0% vs 2.4%) compared with those who had NSMs group. At a mean follow-up time of 51 months, the PSM group had significantly higher rates of cancer-specific (7.9% vs 1.6%) and overall mortality (18.6% vs 4.0%) compared with the NSM group. 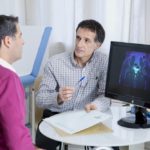 Prostate Cancer Upgrading on AS Linked to Perineural Invasion