In this study, Dr. Anderson and colleagues analyzed all tumors from June 1, 2004, to May 31, 2012, using World Health Organization criteria to classify them as classic lobular, solid and alveolar, and pleomorphic lobular carcinomas. Classic lobular carcinoma is characterized by a distinctive morphology, loss of E-cadherin commonly due to mutation, or deletion of CDH1 on chromosome 16q, and a variable clinical course, he noted. Pleomorphic, solid, and alveolar variants, with distinct morphologies and potential differences in outcome, have been described in a previous study.

Quantitative expression of 16 cancer-related genes was measured on a scale from 2 to 15 (relative to reference genes); a 1-unit increment was associated with an approximate two-fold change in expression. Descriptive statistics for the recurrence score and individual genes (ER, progesterone receptor [PR], invasion gene group, and proliferation gene group) among the subtypes were obtained. 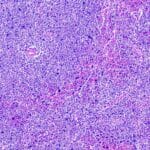