Dose-dense methotrexate plus vinblastine, doxorubicin, and cisplatin (dd-MVAC) can improve outcomes when compared with gemcitabine plus cisplatin (GC) in patients with muscle-invasive bladder cancer (MIBC), a phase 3 trial showed.

These results, from the VESPER trial, were presented at the European Society for Medical Oncology (ESMO) Congress 2021.

“The VESPER trial is a milestone in the history of chemotherapy for MIBC,” said study presenter Christian Pfister, MD, PhD, of Rouen University Hospital in France. “dd-MVAC regimen should now become the gold standard for neoadjuvant chemotherapy.”

In the trial (ClinicalTrials.gov Identifier: NCT01812369), patients with MIBC were randomly assigned to receive 4 cycles of GC every 3 weeks or 6 cycles of dd-MVAC every 2 weeks either before surgery (neoadjuvant group) or after surgery (adjuvant group).

The study’s primary endpoint was progression-free survival (PFS) at 3 years.

In the adjuvant group, PFS and other results were not conclusive due to the limited sample size. 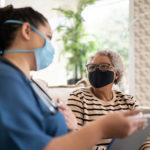