The results were presented at the European Society for Medical Oncology (ESMO) Congress 2021 by Yi-Long Wu, MD, of the Guangdong Lung Cancer Institute in Guangzhou, China.

In the phase 3 GEMSTONE-301 trial (ClinicalTrials.gov Identifier: NCT03728556), Dr Wu and colleagues evaluated the efficacy and safety of sugemalimab as consolidation therapy in patients with unresectable, stage III NSCLC whose disease did not progress after concurrent chemoradiotherapy (cCRT) or sequential chemoradiotherapy (sCRT).

The study included 381 patients from 50 sites in China. The patients were randomly assigned 2:1 to receive sugemalimab at 1200 mg every 3 weeks (255 patients) or matched placebo (126 patients).

Stage IIIB disease was the most common (57% in the sugemalimab arm and 52% in the placebo arm), followed by stage IIIA disease (29% and 25%, respectively).

The overall survival (OS) data were immature, but a trend toward survival benefit was observed with sugemalimab. The median OS was not reached in the sugemalimab arm and was 24.1 months in the placebo arm (HR, 0.44; 95% CI, 0.27-0.73).

The incidence of grade 3-5 treatment-emergent adverse events (AEs) was similar between the treatment arms — 24.3% with sugemalimab and 23.8% with placebo. Grade 3-5 immune-related AEs occurred in 4.7% and 0.8% of patients, respectively.

“The results of the GEMSTONE-301 study suggest that sugemalimab is an effective consolidation therapy for patients with unresectable, stage III non-small cell lung cancer who have not progressed following cCRT or sCRT,” Dr Wu said.

Disclosures: This research was supported by CStone Pharmaceuticals. Some study authors declared affiliations with biotech, pharmaceutical, and/or device companies. Please see the original reference for a full list of disclosures. 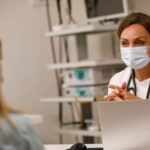