The addition of pembrolizumab to platinum-based chemotherapy with or without bevacizumab prolonged survival compared with chemotherapy with or without bevacizumab among women with previously untreated advanced cervical cancer. These findings, from the phase 3 KEYNOTE-826 trial, were presented at the European Society for Medical Oncology (ESMO) Congress 2021 and simultaneously published in the New England Journal of Medicine.1,2

“Overall, data from KEYNOTE-826 suggests that pembrolizumab plus chemotherapy with or without bevacizumab may be a new standard of care for first-line treatment of persistent, recurrent, or metastatic cervical cancer,” Nicoletta Colombo, MD, of the University of Milan-Biocca and European Institute of Oncology in Italy said during her presentation.

The double-blind, phase 3 KEYNOTE-826 trial (ClinicalTrials.gov Identifier: NCT03635567) randomly assigned 617 patients with persistent, recurrent, or metastatic cervical cancer to receive pembrolizumab or matched placebo plus chemotherapy with or without bevacizumab. Chemotherapy comprised paclitaxel plus cisplatin or carboplatin. Prior systemic chemotherapy, unless prior to radiotherapy or as chemoradiotherapy, was not permitted.

The coprimary endpoints of the trial were progression-free survival (PFS) and overall survival (OS), which were tested sequentially among the PD-L1 combined positive score (CPS) ≥1, all-comer, and CPS ≥10 populations. Secondary endpoints included the objective response rate (ORR), duration of response (DOR), and safety. The presented results were of the first interim analysis with a median follow-up of 22 months.

Dr Colombo concluded that “adding pembrolizumab to chemotherapy with or without bevacizumab provides statistically significant, clinically meaningful improvements in PFS and OS in women with persistent, recurrent, or metastatic cervical cancer.”

Disclosures: This research was supported by Merck Sharp & Dohme Corp., a subsidiary of Merck & Co., Inc. The study authors declared affiliations with biotech, pharmaceutical, and/or device companies. Please see the original reference for a full list of disclosures. 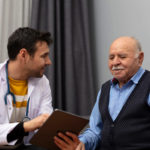