Researchers say they have identified a mechanism by which air pollution causes lung cancer in people who have never smoked.1

The researchers’ findings suggest that oncogenic mutations can occur in never-smokers as they age. These mutations and air pollution can work together to cause lung cancer in this patient population.

These findings were presented at ESMO Congress 2022 by Charles Swanton, MD, PhD, of the Francis Crick Institute in London, UK.

Dr Swanton and colleagues first analyzed samples from 447,932 individuals in the UK Biobank to determine associations between cancer risk and varying concentrations of particulate matter measuring 2.5 micrometers or smaller (PM2.5).

The researchers found that higher PM2.5 concentrations were associated with a greater risk of cancers of the small intestine, anus/anal canal, larynx, lip/oral cavity/pharynx, and lung, as well as pleural mesothelioma and glioblastoma.

To investigate this further, the researchers used mouse models. The team induced EGFR or KRAS mutations in mice and exposed the mice to PM2.5 or control. The mice exposed to PM2.5 had the same dose-dependent increase in the number of tumors or adenoma-to-carcinoma transition, regardless of the mutation type.

This suggests the association between PM2.5 and lung cancer is independent of the underlying driver mutation, Dr Swanton said.

To investigate this finding further, the researchers looked at alveolar type 2 (AT2) cells, which are thought to be one of the cells of origin for EGFR-mutant lung cancer. Additional experiments in mice revealed that pollution induces an AT2 transcriptional signature and produces more AT2 cells in these mice.

However, it was unclear if pollution enhances a stem cell/tissue progenitor state.

So the researchers assessed tissue stemness in epithelial cells from mice. The team compared EGFR-mutant epithelial cells with EGFR wild-type cells and evaluated the effects of pollution exposure.

This experiment revealed that neither air pollution alone nor EGFR mutations alone are sufficient to augment a stem cell state. Both are required.

To investigate how this happens, the researchers analyzed data from the COPA study (ClinicalTrials.gov Identifier: NCT02236039). In this study, healthy never-smokers were exposed to either PM2.5 for 2 hours or filtered air for 2 hours.

The researchers compared the transcriptional response to PM2.5 in patients from the COPA trial with the response in the mouse models, looking for common cytokines. IL-1β was upregulated in both species.

IL-1β is known to induce an AT2 progenitor state, and the researchers found that air pollution drives IL-1β expression from lung epithelium and alveolar macrophages. The researchers also found that IL-1β can mimic PM2.5 in a stem cell progenitor assay and overcome the need for pollutants.

This is consistent with findings from the CANTOS trial, which showed a reduction in lung cancer incidence in patients treated with the anti-IL1β antibody, canakinumab.2

“We found that driver mutations in EGFR and KRAS … are actually present in normal lung tissue and are a likely consequence of aging,” Dr Swanton explained in a statement.3

Disclosures: Some of the study authors declared affiliations with biotech, pharmaceutical, and/or device companies. Please see the original references for a full list of disclosures. 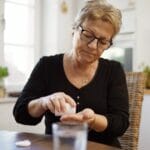