Computed tomography (CT) screening substantially reduced lung cancer deaths among asymptomatic patients at high risk for lung cancer, with most cases detected in stage I, according to results from the NELSON trial presented at the IASLC’s 19th World Conference on Lung Cancer in Toronto, Canada.1

The population-based NELSON trial “is the second largest trial in the world, with an even more favorable outcome than the first trial, the NLST, showed,” Harry De Koning, MD, PhD, of Erasmus MC in the Netherlands, said in a press release.2“ These results should be used to inform and direct future CT screening in the world,” he said.

The NELSON trial randomly assigned 15,792 patients at high risk of developing lung cancer to undergo CT screening or no screening during the course of 5 years. CT screening was conducted at baseline and at 1, 3, and 5.5 years after randomization. National registries were used to determine cancer diagnosis, date of death, and cause of death.

The CT screening compliance rate was 86, with a minimum follow-up of 10 years for most patients. Detection of suspicious nodules resulted in an overall referral rate of 2.3%, and detection rates were 0.8% to 1.1%. CT screening detected 261 lung cancers before the fourth round of follow-ups, and 69% of lung cancers were stage IA or stage IB.

CT screening reduced the risk of lung cancer–related deaths at 10 years by 26% (95% CI, 9%-41%) resulting in a rate ratio (RR) of 0.74 among men. Women appeared to derive a greater benefit from CT screening, with a RR of lung cancer–related death of 0.39 to 0.61, depending on the year of follow-up. Patients who underwent CT screening were significantly more likely to undergo surgical treatment compared with patients in the control arm (68% vs 25%; P< .001).

According to Dr De Koning, “these findings show that CT screenings are an effective way to assess lung nodules in people at high risk for lung cancer, often leading to detection of suspicious nodules and subsequent surgical intervention at relatively low rates and with few false positives.” 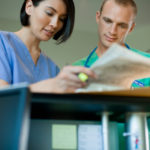