Sugemalimab could be a new standard of care as consolidation therapy for patients with unresectable, stage III non-small cell lung cancer (NSCLC), according to a presentation at the IASLC 2022 World Conference on Lung Cancer.

Overall survival (OS) data are not yet mature, but there was a trend toward improvement in OS with sugemalimab as well.

“The results of the GEMSTONE-301 study suggest that sugemalimab could be safely and effectively used after concurrent or sequential chemoradiotherapy and should be a new standard of care in this setting for stage III, inoperable non-small cell lung cancer,” said Yi-Long Wu, MD, PhD, of Guangdong Lung Cancer Institute in China, who presented the study findings at the meeting.

GEMSTONE-301 (ClinicalTrials.gov Identifier: NCT03728556) included 381 patients with unresectable, stage III NSCLC and no disease progression after cCRT or sCRT. None of the patients had sensitizing EGFR, ALK, or ROS1 alterations.

The primary endpoint was PFS by blinded independent review. The median follow-up for PFS was 27.1 months in the sugemalimab arm and 23.5 months in the placebo arm.

There was a significant improvement in PFS with sugemalimab in the overall cohort and when patients were separated by receipt of sCRT and cCRT.

The OS data were not mature at the data cutoff, but there was a trend toward improvement in OS with sugemalimab. The median follow-up for OS was 27.1 months in the sugemalimab arm and 23.5 months in the placebo arm.

The most common TRAEs in the sugemalimab arm were hypothyroidism, ALT/AST increase, hyperthyroidism, pneumonitis, and immune-mediated lung disease.

There were 12 fatal treatment-emergent adverse events in the sugemalimab arm and 3 in the placebo arm. 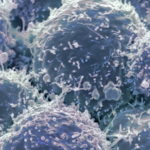