The risk for end-stage renal disease (ESRD) is 10 times higher in patients diagnosed with renal cell carcinoma (RCC) than in the general population, according to results of a study presented at IKCS North America 2022.

To evaluate the extent to which patients with RCC are at increased risk for ESRD, investigators sourced data from the National Swedish Kidney Cancer Register, Swedish Renal Registry, National Patient Register, and Cause of Death Register.

The researchers matched 9299 patients with RCC diagnosed between 2005 and 2014 to 93,895 control individuals. ESRD was defined as chronic kidney disease stage 5, receipt of dialysis, or receipt of renal transplant.

The risk of ESRD among RCC patients relative to control individuals was higher in the first year after RCC diagnosis (hazard ratio [HR], 18) than from year 2 to 10 after diagnosis (HR, 7).

The risk of developing ESRD within 5 years of RCC diagnosis was significantly decreased in women (HR, 0.65; P =.009) and among patients who underwent partial nephrectomy or tumor ablation rather than radical nephrectomy in the first year (HR, 0.39; P =.01).

On the basis of these findings, the researchers concluded that patients with RCC are more likely than the general population to develop ESRD. Risk factors for ESRD in the setting of RCC included chronic kidney disease, hypertension, diabetes, and male sex. 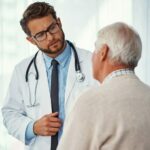