Investigators observed increased use of dual immunotherapy or immunotherapy plus a TKI in recent years, as the use of TKI monotherapy has decreased.

The investigators conducted this study using data from The US Oncology Network and non-network clinics that use the iKnowMed™ electronic health record system.

The study included 1538 patients who received first-line treatment for mRCC between January 1, 2018, and September 30, 2020. The patients’ median age was 67.1 years. Most were men, were White, had clear cell carcinoma, and had intermediate/poor-risk disease.

The most common second-line treatments were:

To determine the optimal sequencing of treatments after the first line, “a longer follow-up is needed,” the investigators noted. 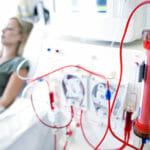