The study also suggests that high-dose chemotherapy does not provide a benefit over maintenance-type chemotherapy in this patient population.

Researchers conducted a multicenter study of 31 patients with LFS SHH-MB. This is the largest retrospective cohort of pediatric LFS SHH-MB patients to date, according to the researchers.

Most patients (69%) had undergone gross resection, and 81.2% had M0 disease (81.2%). The researchers noted that 72% of constitutional TP53 variants were missense variants, and all but 2 truncating variants were located within the DNA-binding domain.

Secondary malignancies occurred in 12.5% of patients, and all proved fatal.

Taking these findings together, the researchers concluded that patients with LFS SHH-MB have a “dismal” prognosis. The team noted that prospective data collection and treatment guidelines are needed for this patient population. 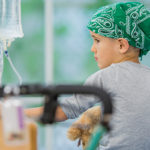