The ratio of metastatic to examined lymph nodes, called the lymph node ratio (LNR) may offer slightly improved survival prediction over the current measure among patients with carcinoid neuroendocrine tumors in the gastrointestinal tract, according to findings (NET Abstract #C11) presented at the 7th Annual Neuroendocrine Tumors (NET) conference in Nashville, TN. The meeting was organized by the North American Neuroendocrine Tumors Society (NANETS).

“We believe that LNR is an important independent predictor of survival for individuals with carcinoid tumors,” said lead study author Virginia Flatow, a medical student at the Icahn School of Medicine at Mount Sinai Hospital in New York, NY, and her colleagues. ”However, LNR only provides a modest benefit when compared with the binary predictor of whether or not there are positive regional nodes.”

The presence or absence of nodal metastases in carcinoid tumors has been reported repeatedly in the past, and the American Joint Committee on Cancer (AJCC) uses N1 or N0 of regional node metastases as a prognostic indicator for patients with these tumors.

Because “some research suggests that lymph node ratio may be a superior way to evaluate nodal involvement in cancer,” the study’s authors analyzed data for 11,189 patients with carcinoid tumors using the National Cancer Institute (NCI)’s Surveillance, Epidemiology, and End Results (SEER) database. 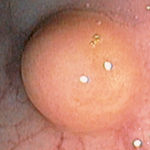 Some Locally-Advanced and Metastatic Pulmonary Carcinoid Tumors Respond to Chemotherapy