Pictilisib did not increase tumor cell apoptosis over ANA alone. The safety profile of the combination was “acceptable and consistent with other trials,” he added.

Neither PIK3CA mutations nor PTEN status were predictive of responses to pictilisib, he noted.

Previous studies support a “key role for the PI3K pathway in resistance to endocrine therapy in patients with ER+ breast cancer and suggest that combining PI3K inhibitors with endocrine therapy may overcome resistance,” Dr. Schmid said.. “Short-term preoperative WOO studies are a validated strategy for novel treatments to provide proof-of-concept and define the most appropriate patient population by directly assessing treatment effects in tumor tissue before and after treatment.”

A total of 70 evaluable postmenopausal patients not receiving hormone replacement therapy and who had been newly diagnosed with operable ER+, HER2-negative breast cancer were randomly assigned to receive 2 weeks of preoperative treatment with ANA plus pictilisib (n=44, “ANA+PIC” arm) or ANA alone (n=26, “ANA” arm), the coauthors reported.

Treatment effects were studied using tumor biopsies acquired before and after 14 days of treatment. The primary study endpoint was change in Ki67 expression, a measure of inhibited tumor-cell proliferation. Secondary endpoints include induction of apoptosis (Caspase3) and safety.

Subgroup analyses indicate that ANA+PIC response was importantly affected by tumor molecular subtype and high Ki67; patients with Luminal B tumors or high Ki67 had a higher Ki67 suppression response with ANA+PIC than ANA alone (Luminal B: 86.5%% versus 63.6), he reported.

In contrast, response was nearly identical for both treatments in Luminal A tumors (76.9% versus 76.6% for ANA and ANA+PIC, respectively). 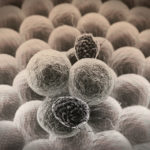