“Our results indicate that early skin rash can identify patients who would derive superior benefit from lapatinib,” reported lead author Hatem A. Azim Jr, MD, of the Institut Jules Bordet in Belgium. “Early rash is the first ‘biomarker’ in the field of HER2-positive breast cancer to predict benefit to a HER2-targeted agent based on the results of two randomized phase 3 clinical trials.”

They sought in the new subgroup analysis to assess whether early lapatinib-associated rash is also associated with improved patient survival. Statistical analyses were adjusted for treatment arm, treatment completion and trial stratification factors.

“No significant association was observed between the development of early rash and clinicopathological factors except for being more common in younger patients (age 50 or younger vs older than 50; P < .0001),” Dr Azim reported.

“Twenty percent of patients on the trastuzumab arm developed rash, yet as expected this was not associated with a better outcome,” he concluded. 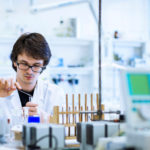