Cancer researchers have long believed that tumors are fundamentally genetic diseases, rooted in accumulations of driver mutations that overcome the body’s tumor-suppression mechanisms and apoptotic safeguards. In this model, Darwinian selection pressures from cytotoxic therapies favor newly-acquired tumor mutations that can provide avenues of escape via drug resistance.

Researchers in the emerging field of tumor ecology are finding, however, that this model is incomplete.

Tumors emerge and progress in microenvironments that are rich in other actors, from normal tissue cells to bacteria and immune cells. Much more is at play than can be explained with simple models of tumor cell-autonomous mutations. Even within tumors, cellular interactions are much more complex than simple clonal expansion suggests.

“There are cancer phenotypes that arise because of inappropriate interactions with the tissue,” said Scott S. Verbridge, PhD, of Virginia Tech’s Wake Forest School of Biomedical Engineering and Sciences in Blacksburg, Virginia. “For a really long time we assumed once we had the genome sequenced, we would have cancer cured. We’ve been overly focused on the genetics. There are so many mutations, so much heterogeneity even within 1 tumor, that a biopsy of 1 part of the tumor can get one signature, while another region yields another. There’s just an incredible amount of heterogeneity.”

“You have to look at those interactions,” emphasized Jeffrey M. Rosen, PhD, of the Baylor College of Medicine in Houston, Texas. “Just looking at the primary tumor’s mutations—a cell-autonomous view of the mutational landscape—might not give you the whole story.”

Dr Rosen chaired a panel discussion on tumor ecology at the 2016 San Antonio Breast Cancer Symposium in Texas. He, along with Kornelia Polyak, MD, PhD, of the Dana-Farber Cancer Institute in Boston, Massachusetts, and Clare M. Isacke, PhD, of the Institute of Cancer Research in London, England, presented recent findings about cell ecology within and around tumors.

Cancer is much more than a single cell with mutations affecting particular signaling pathways, Dr Rosen told Cancer Therapy Advisor. His part of the panel discussion focused on intratumoral heterogeneity and paracrine signaling among tumor cells.

“Signaling interactions are not all intrinsic to the tumor cell. They include nearby cell interactions,” Dr Rosen explained. “Your neighbors are playing important roles, and response to therapy is going to be affected by that.”

“We found that those cells made ligands and set back on the cancer stem cell to affect the Wnt pathway,” Dr Rosen said. “These interactions suggest that just targeting the major clone in a tumor might not be sufficient, especially since not all mutations in metastases even show up in the primary tumor.”

This has been best studied thus far in breast cancers with endocrine-resistant mutations found in metastases but rarely in the primary tumor.

At Dr Verbridge’s lab, scientists are using tissue-engineering tools to study tumor models by experimenting with local cell ecology. “We are interested in the interplay between microenvironment and epigenetics,” Dr Verbridge said. “We’re putting different cell types together to look at experimental evolutionary biology—how cells compete, getting a handle on how low-oxygen environments might select certain types of more malign cell populations.” 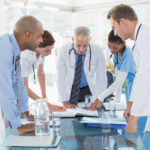