The addition of pembrolizumab to chemotherapy benefited previously untreated patients with inoperable or metastatic triple-negative breast cancer (TNBC), regardless of chemotherapy regimen, according to an updated analysis of the randomized phase 3 KEYNOTE-355 trial (ClinicalTrials.gov Identifier: NCT02819518). The data were presented at the 2020 Virtual San Antonio Breast Cancer Symposium (SABCS).

The updated analysis reported a prespecified exploratory endpoint on the consistency of treatment effect by chemotherapy regimen in the overall study population and among patients with programmed cell death 1 (PD-L1)–positive disease.

Further analysis of the trial also revealed that patients with greater PD-L1 expression had a higher response rate and greater disease control.

“Results for the key secondary endpoints of [overall response rate], [disease control rate], and [duration of response] favored pembrolizumab plus chemotherapy, with the treatment effect increasing with PD-L1 enrichment,” the presenters wrote on their slides. “These data further support a role for the addition of pembrolizumab to standard chemotherapy for the first-line treatment of mTNBC.”

Study discussant Sylvia Adams, MD, professor of medicine and director of the Breast Cancer Center at New York University, commented that the exploratory endpoint finding is “very important” because it is currently unknown what the optimal chemotherapy backbone is.

However, she cautioned that this analysis was exploratory and not powered to show the “winner” as it relates to the best chemotherapy backbone. 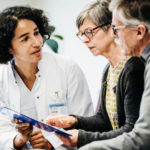