Recurrence of esthesioneuroblastoma (ENB) with non-contiguous intracranial metastasis is possible 19 years after remission, according to a poster presented at the Society for Neuro-Oncology 27th Annual Meeting.

Based on this finding and the poor survival associated with intracranial involvement, researchers recommended that lifetime surveillance “should be considered” in all patients with ENB.

The researchers performed a systematic review of the literature on metastatic ENB and presented a case report of a patient who had non-contiguous intracranial ENB metastasis 19 years after achieving remission.

The median time to intracranial metastasis was 6 years from primary tumor diagnosis, and the median overall survival from time of recurrence was 11.5 months.

In the case report, an 82-year-old woman presented with non-contiguous intracranial ENB metastasis 19 years after remission. According to the researchers, that is the longest disease-free interval for ENB reported in the literature. The patient underwent surgical management of the metastasis.

“ENB is a highly recurrent tumor and harbors the potential to involve the intracranial space even years after remission,” the researchers wrote. “Intracranial involvement entails poor overall survival. Lifetime radiographic follow-up should be considered in all patients with ENB.” 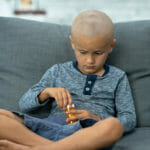