Adjuvant chemotherapy after cytoreductive surgery does not improve survival for patients with advanced-stage low-grade serous ovarian carcinoma (LGSOC), according to a retrospective study.

The study was presented at the SGO 2022 Annual Meeting on Women’s Cancer by Dimitrios Nasioudis, MD, of the University of Pennsylvania in Philadelphia.

Dr Nasioudis and colleagues evaluated data from 618 patients with stage II-IV LGSOG enrolled in the National Cancer Database between 2010 and 2015.

“In conclusion, 1 in 5 patients with advanced-stage low-grade serous ovarian carcinoma did not receive adjuvant chemotherapy following primary debulking surgery,” Dr Nasioudis said. “While residual disease was identified as an important prognostic factor, adjuvant chemotherapy may not be associated with a survival benefit.”

Disclosures: Dr Nasioudis and colleagues reported having no conflicts of interest. 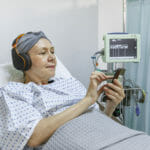