First-line maintenance with niraparib at an individualized starting dose (ISD) significantly improved progression-free survival (PFS) in patients with advanced ovarian cancer, according to results of the PRIME study.

The median PFS was 16.5 months longer with niraparib than with placebo, and the PFS benefit was observed regardless of biomarker status or postoperative residual disease status.

These results were presented at the SGO 2022 Annual Meeting on Women’s Cancer by Ning Li, MD, of the National Cancer Center of China.

Dr Li noted that niraparib is approved as first-line maintenance in ovarian cancer based on results of the PRIMA study (ClinicalTrials.gov Identifier: NCT02655016), which showed a PFS improvement with niraparib regardless of biomarker status.

However, the PRIMA study did not include patients with stage III disease who had no residual disease after primary debulking surgery. In addition, an ISD was used in about 35% of patients on the study.

In the PRIME study (ClinicalTrials.gov Identifier: NCT03709316), researchers evaluated niraparib maintenance with an ISD in all patients. The trial enrolled patients with stage III-IV ovarian cancer who had undergone primary or interval cytoreductive surgery with any postoperative residual disease status. The patients had also responded to first-line platinum-based chemotherapy.

The cohort included 384 patients who were randomly assigned to receive niraparib (n=255) or placebo (n=129) for 36 months or until disease progression or unacceptable toxicity. Baseline characteristics were well balanced across the arms.

The PFS benefit was consistent across all prespecified subgroups. In particular, Dr Li pointed out that niraparib provided a PFS benefit regardless of germline BRCA status.

An analysis limited to patients without germline BRCA mutations showed a PFS benefit with niraparib in patients with or without homologous recombination deficiency (HRD).

With the ISD, the safety profile of niraparib was improved, Dr Li said. The median relative dose intensity was 100% for both niraparib and placebo.

Disclosures: This research was supported by Zai Lab. Dr Li reported having no conflicts of interest. 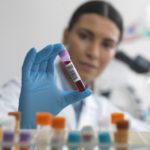 ctDNA May Allow for Earlier Detection of Progression in Ovarian Cancer