Allogeneic transplant after failure of chimeric antigen receptor (CAR) T-cell therapy can be effective for patients with lymphoma, a retrospective study suggests.

Dr Zurko noted that 1-year outcomes in this study were similar to outcomes seen with allo-HSCT for LBCL patients who have not received prior CAR T-cell therapy. She presented these results at the Tandem Meetings 2022.

Dr Zurko and colleagues evaluated allo-HSCT after CAR-T therapy in 88 patients with relapsed/refractory LBCL. The patients’ median age at transplant was 54 years (range, 19-72), 72% of patients were men, and 66% were White.

Right before transplant, 51% of patients had achieved a complete response (CR), 25% had a partial response, and 24% had stable or progressive disease.

On multivariate analysis, inferior PFS was significantly associated with a higher number of treatment lines between CAR-T therapy and allo-HSCT as well as a lack of CR prior to allo-HSCT.

“Based on these findings, we believe that transplant-eligible patients, at least those who achieve a CR after CAR-T failure, should be considered for allogeneic transplant at this time,” Dr Zurko said.

She also emphasized the need for long-term follow-up to confirm the durable remission rate and curative potential of allo-HSCT after CAR-T failure. 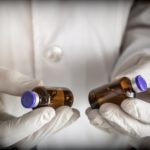