Depatuxizumab mafodotin does not improve overall survival (OS) when added to radiotherapy and temozolomide in newly diagnosed glioblastoma, according to phase 3 results published in Neuro-Oncology.

Researchers theorized that depatuxizumab mafodotin might benefit patients with glioblastoma because the antibody-drug conjugate targets activated EGFR and EGFR amplification is present in roughly 50% of glioblastomas.

All patients received radiotherapy plus temozolomide, and they were randomly assigned to receive depatuxizumab mafodotin (n=323) or placebo (n=316). Baseline characteristics were well balanced between the treatment arms.

Disclosures: This study was supported by AbbVie. Some study authors declared affiliations with biotech, pharmaceutical, and/or device companies. Please see the original reference for a full list of disclosures. 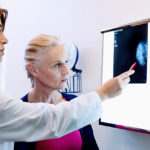 Delay to Biopsy After Mammography Varies by Ethnicity in US