Amygdalin, also referred to as laetrile, is a cyanogenic glucoside found in fruit pits, raw nuts, and some other plants such as lima beans and sorghum.1 Although they are often used interchangeably, laetrile is a purified form of amygdalin. Though sometimes called vitamin B-17, amygdalin is not officially recognized as a vitamin.

Amygdalin became popular in the 1970s as an anticancer therapy, but after a phase 2 clinical trial demonstrated both no antitumor activity and a risk of cyanide poisoning, the U.S. Food and Drug Administration banned its use.2 An internet search, however, returns multiple hits touting the anticancer activity of amygdalin and the efforts of the FDA or pharmaceutical industry to “cover up” its efficacy. It is readily available through online retailers.

In Vitro and Animal Studies

Most animal studies, however, failed to show antitumor activity for various induced and xenograft tumors.1

Positive case reports in the 1970s spurred the National Cancer Institute to initiate phase 1 and 2 trials. The phase 2 trial conducted by the NCI evaluated 175 patients with cancer, primarily of the lung, breast, and colorectal regions.8 The amygdalin used in the study was naturally derived from apricot pits and was administered at doses accepted as standard at the time. Patients received 21 daily intravenous injections of 4.5 g/m2 followed by oral maintenance therapy at 0.5 g three times daily. Patients also followed a “metabolic therapy” program that consisted of a diet with enzyme and vitamin supplements. The only tumor response reported was a single partial response that lasted for 10 weeks. Cyanide toxicity, however, was noted particularly with oral administration. Other potential adverse effects considered related to amygdalin were dermatitis, headache, dizziness, mental obtundation, nausea, and vomiting. One patient experienced tachycardia and dyspnea after dosing.

A systematic review found no randomized controlled trials that have evaluated amygdalin and concluded that there are no data to support its efficacy, but the risk of cyanide poisoning should discourage its use.2 Cyanide poisoning occurs due to hydrolysis of amygdalin in the gastrointestinal tract by bacterial and plant beta-glucosidase, which is consistent with the finding that this toxicity is associated with oral administration.1 Several recent case reports further support the risk of cyanide poisoning, including that of a 73-year-old woman with pancreatic cancer and a 4-year-old child with ependymoma.9,10

Though in vitro data continue to suggest anticancer activity of amygdalin, animal data and in-human studies have failed to show efficacy. There is a risk of cyanide toxicity with amygdalin use, especially when ingested orally. Therefore, amygdalin is not recommended for use. 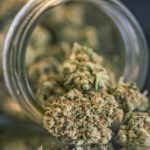