Aspartame, a synthetic, non-nutritive sweetener, was approved by the US Food and Drug Administration (FDA) in 1981 for use in dry goods and expanded in 1983 to include carbonated soft drinks. Since this time, the additive has been the center of a controversy regarding its safety and potential benefits.

Most epidemiologic studies reporting cancer incidence rates, for example, are peppered with comments regarding study design, limitations, and purported erroneous interpretations and conclusions.1-4 Many of these comments come from advocates on both sides of the controversy.

Aspartame is metabolized in the gastrointestinal tract by humans (and rodents) into aspartic acid, phenylalanine, and methanol.5 The constituent is methanol, which is converted to formaldehyde and then formic acid. Formaldehyde is a known carcinogen.

The European Ramazzini Foundation (ERF) initiated a long-term carcinogenicity study of aspartame in 1800 Sprague-Dawley rats.5 The animals received 80 to 100,000 ppm of ad libitum aspartame or control daily — simulating 4 to 5000 mg/kg of human daily intake — in their food based on 400 g body weight. Intake began at 8 weeks and lasted for the duration of their natural life; all animals underwent complete necropsy upon death.

The last rat died at 159 weeks. There was no difference in overall survival between treated animals and controls, or males and females. A small decrease in mean body weight occurred in females receiving 10,000 ppm aspartame compared with controls.

The authors concluded that this ERF study overcame the flawed truncated studies previously conducted, and called for an extensive regulatory review of aspartame safety.

In response, the FDA requested and reviewed data from the ERF study, but reported that they received only a portion of the study data despite an additional request.6

The ERF did not allow FDA to review the pathology slides. Based on the supplied, but incomplete, data, the FDA concluded that pathological changes were incidental and spontaneous.

Risk of Cancer in Epidemiologic Studies

A case-control study conducted among patients with primary brain cancer or healthy controls between 1984 and 1991 found no association with aspartame consumption, including time of first consumption, duration or frequency of consumption, or exposure in utero or during breast feeding.7

An analysis of the NIH-AARP Diet and Health Study (NIH-AARP) reviewed food frequency and baseline characteristics questionnaires from 473,984 individuals aged 50 to 71; histologically confirmed cancer cases were identified from cancer registries.8 Aspartame users consumed about 200 mg (about one 12-oz soda) of aspartame daily and were more likely to have a history of diabetes and have a higher body mass index.

Aspartame consumption was not associated with increased risk of hematopoietic cancer, the main subtypes of lymphoma, gliomas, or glioblastoma. Limitations of the study design, according to commentary, include limiting the analysis to beverages (whereas chewing gum and food can contain aspartame), the low level of aspartame use among subjects (about 1 can of soda daily), and the age of the cohort.1,4

A network of case-control studies conducted in Italy between 1991 and 2004 demonstrated no association between aspartame consumption and histologically confirmed cancers of the oral cavity and pharynx, esophagus, colon, rectum, larynx, breast, ovaries, prostate, or kidney.9

One of the only studies that demonstrated a positive association was a case-control study of 197 patients with histologically confirmed urinary tract tumors (UTTs).10 This study found a significant increase in risk of UTTs with more than 10 years of aspartame use (odds ratio, 2.18; 95% CI, 1.22-3.89) after adjusting for age, gender, body mass index, social status, and years of tobacco-use.

Data from 3 Italian case-control studies included cases with histologically confirmed cancer and controls admitted to the hospital for acute, non-neoplastic disorders.11 There was no significant association between users of artificial sweeteners, which included aspartame, and gastric, pancreatic, and endometrial cancers. 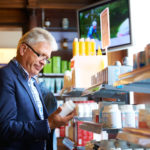 Vitamin A and Cancer