The provitamin beta-Carotene is a plant pigment that converts to the active forms of vitamin A (ie, retinal or retinoic acid) intracellularly.1 Vitamin A is critical for immune function, cell signaling, reproduction, vision, and formation/maintenance of many organs.

Although higher intake of carotenoids via fruits and vegetables is associated with reduced cancer risk, findings from several large, randomized, controlled trials in the 1990s indicated that beta-Carotene supplementation may increase the risk of certain cancers. This fact sheet focuses on studies evaluating the effect of beta-Carotene supplementation on cancer incidence and outcomes.

No Benefit of beta-Carotene Supplementation

The beta-Carotene group also had a greater incidence of prostate (difference, 20%; 95% CI, -13% to 66%) and stomach cancers compared with the placebo group.2,4 There was no difference in incidence of colorectal cancer, colorectal adenoma recurrence, pancreatic cancer, urinary tract cancers, or liver cancer among those who received beta-Carotene compared with placebo.5-9

An 18-year follow-up analysis, however, found no significant difference in overall mortality or lung or prostate cancer–associated mortality between the beta-Carotene group compared with others.10

The CARET study randomly assigned 18,314 smokers, former smokers, and asbestos-exposed participants aged 46 to 74 living in the United States to receive beta-Carotene (30 mg daily) plus retinol (25,000 IU daily) or placebo beginning in 1985.11 The asbestos cohort included subjects with occupational exposure starting at least 15 years prior to enrollment.

The CARET intervention was halted early in January 1996 when an interim analysis detected excess mortality, and in consideration of the ATBC trial results. 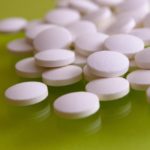