What is bone cancer?

Both malignant and benign bone tumors may grow and compress healthy bone tissue, but benign tumors do not spread, do not destroy bone tissue, and are rarely a threat to life.

Malignant tumors that begin in bone tissue are called primary bone cancer. Cancer that metastasizes (spreads) to the bones from other parts of the body, such as the breast, lung, or prostate, is called metastatic cancer, and is named for the organ or tissue in which it began. Primary bone cancer is far less common than cancer that spreads to the bones.

Are there different types of primary bone cancer?

Yes. Cancer can begin in any type of bone tissue. Bones are made up of osteoid (hard or compact), cartilaginous (tough, flexible), and fibrous (threadlike) tissue, as well as elements of bone marrow (soft, spongy tissue in the center of most bones).

Common types of primary bone cancer include the following:

Other types of cancer that arise in soft tissue are called soft tissue sarcomas. They are not bone cancer and are not described in this resource. 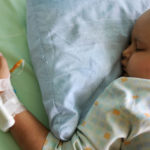 Helping Children Cope With Side Effects From Cancer Treatment