The products of Ginkgo biloba (Ginkgo biloba) were used in traditional Chinese medicine for a variety of ailments; today they are still used as a dietary supplement for memory enhancement and for conditions including dementia, tinnitus, and ocular issues.1

Supplementation with Ginkgo extract has been evaluated in several clinical trials. While in vitro studies suggest that Ginkgo extract may have anticancer properties, human studies have failed to demonstrate a benefit.

Large epidemiologic studies suggest that supplementation with Ginkgo does not affect the risk of cancer. An analysis of 3069 participants aged 75 or older from the randomized, placebo-controlled Ginkgo Evaluation of Memory (GEM) Study found no association with the use of Ginkgo extract (120 mg twice daily) and overall cancer incidence.2 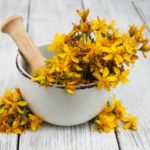