People are becoming increasingly concerned about the potential health impact of exposure to plastics, namely because plastic is so ubiquitous. There are few studies that evaluate the environmental exposure to plastic and cancer risk, though there are studies that have evaluated the effect of some specific components found in plastics, such as the endocrine disruptors bisphenol A (BPA) and phthalate.1 Several studies have evaluated occupational exposure to plastic by evaluating the incidence of cancer among plastic workers. Most of these studies investigated cancer risk stratified by styrene exposure. Overall, the results have been inconclusive, and few consistent trends have been demonstrated.

Another case-control study evaluated geographical location as it related to industrial sites and risk of breast cancer.3 This study included 1962 individuals: 452 with breast cancer and 1511 control cases. Distances from industrial sites were calculated based on the participants’ residences. There was determined to be excess risk for breast cancer among women who lived within 3 km of industrial sites involved with surface treatment of plastic and metals (OR, 1.51; 95% CI, 1.06-2.14).

Several epidemiologic studies, including a systematic review and a meta-analysis, have evaluated the effect of occupational exposure to plastic (including styrene) on cancer incidence, but the results have been mixed. A systematic review of workers in the plastics industry exposed to styrene found no consistent increased risk in any cancer — but it is worth note that the study was funded by a grant from the Styrene Information and Research Center.4 A large cohort study of 72,292 workers from 443 companies that produce reinforced plastic products in Denmark found an increased risk for any cancer (standardized incidence rate [SIR], 1.04; 95% CI, 1.02-1.06).5 However, the significance was limited to long-term employees; workers who began their employment between 1964 and 1989. There was found to be no elevated risk for cancer among workers who began employment after 1990.

Epidemiologic studies found positive associations between occupational plastic exposure and increased cancer incidence for sinonasal cancers. In the Danish cohort, the SIR was 1.62 (95% CI, 1.12-2.26), but this was not consistent with increasing duration of employment.5 Another study of a similar Danish cohort, which included 73,092 styrene-exposed workers, found a nonsignificant trend toward increased incidence of sinonasal adenocarcinoma, but the samples size of cases was just 9 (OR, 5.11; 95% CI, 0.58-45.12), thereby limiting any conclusions.6 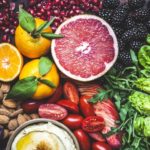 A Vegan Diet and Cancer